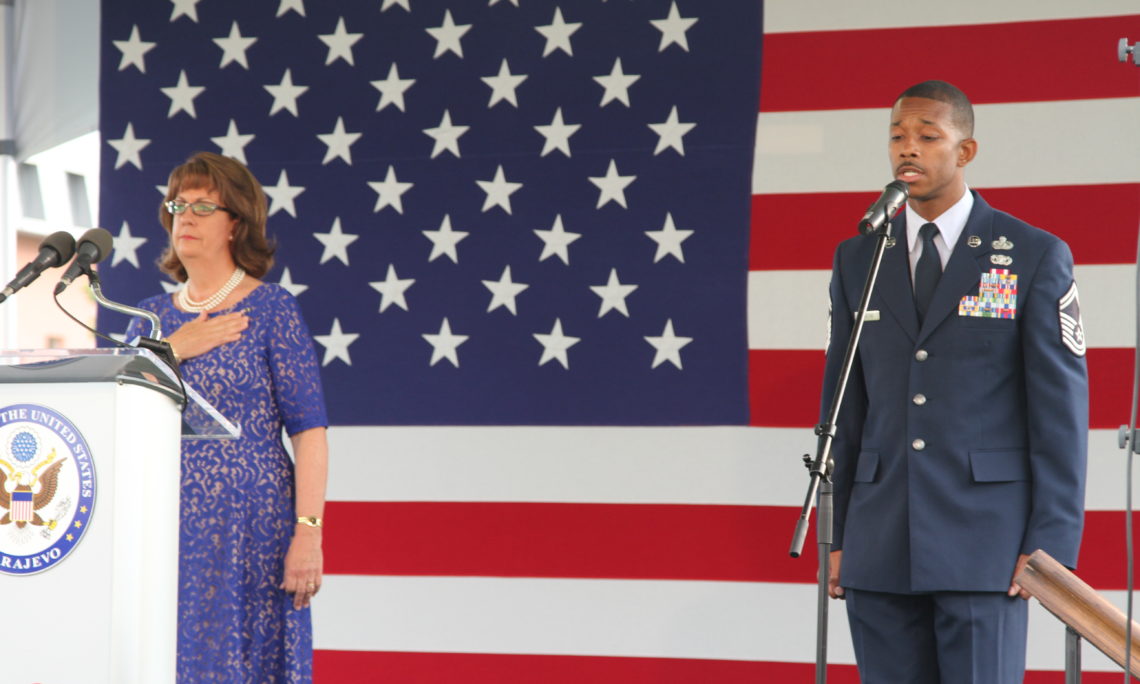 Chairman Zvizdic, Distinguished Ministers and Colleagues, Honored Guests — good evening.  As the United States Ambassador to Bosnia and Herzegovina, it is an honor to host each of you for our Independence Day Celebration.  Dobrodosli and welcome.

I would like to give a special welcome to the 22 U.S.-affiliated businesses that contributed their support to make this celebration possible.  Again this year, we received a new record of contributions, reflecting the growing American commercial presence in Bosnia and Herzegovina.  Thank you for your support!

Ladies and Gentlemen, on Independence Day we celebrate America’s birthday — with barbeques and parades, baseball and fireworks.  Like on all birthdays, we have a chance to celebrate and relax — but also to reflect, to look forward and look back. It’s an opportunity for us to recall our common foundations, to remember that bold proposition 240 years ago: “That all men are created equal … endowed by their creator with certain inalienable rights, among them, life, liberty, and the pursuit of happiness.”

Those words from Thomas Jefferson were revolutionary then and remain powerful today.  As Americans, we still struggle and search for new ways to live up to them.

And as Bosnia and Herzegovina struggles to move forward on its chosen path, I believe that the first three words of the U.S. Constitution “We the people” are the most meaningful to reflect on tonight.  Because from the 4thof July, 1776 until today, it is the active engagement of America’s citizens — of “We the people” — that has shaped our future.

Engagement in a diverse society is not always easy.  Building bridges between different communities; reaching out to someone from a region or family where there’s difficult history: the kind of engagement that matters most is profoundly difficult.  It challenges citizens to think differently, break with the past, and imagine a new future.  That’s the engagement America’s Founding Fathers put into practice and put everything at risk to do so.

These men were far from perfect.  But because they stood up and stood together, because they “sacrificed their lives, their fortunes, and their sacred honor,” not for a King, or a family, but for an idea, that “We the people” were sovereign, they set our American story in motion.

But our nation has succeeded not simply because of one document at our creation, or even because of the wise early leaders who set our course.  The greatest power of the United States came from “We the People,” from the engagement and commitment of everyday citizens to create something new and something better for the next generation.

Of course, that story has never been a straight line.  America’s journey is defined by great leaps forward but also by great setbacks and great struggles. But from many of these struggles, whether for the emancipation of slaves, for civil rights, women’s rights, or human rights, America has emerged stronger. And generation after generation, it is the renewed commitment and engagement of Americans to their communities and to our founding ideals that revitalizes our nation.

We’re privileged to have a group of Americans with us today who carry forward this commitment through their public service in Dayton, Ohio.  I want to welcome Mayor Nan Whaley, City Commissioner Mat Joseph, and the delegation from Dayton, and thank them for joining us in Sarajevo today.

These leaders come from different backgrounds and I’m sure they hold many different political views. But together, they’re engaged in a common endeavor: to bring more opportunities and jobs to their city, to attract more businesses and families, to ensure that Dayton, and its next generation, makes the most of their potential.

Of course, Dayton’s citizens share a special friendship with this nation.  The peace talks hosted there more than two decades ago mean that the history of Dayton and of Bosnia and Herzegovina will forever be linked.  But that Dayton’s leaders have come to Sarajevo today, to celebrate our own national holiday, shows a bond that endures.

The people of Dayton probably understand the similarities between our nations better than most Americans.  They understand how we share some similar beginnings and foundations; that we are two nations where people from different regions and different histories dared to shape a new future together.

But whether we are from Dayton, Ohio, or Des Moines, Iowa, as Americans, we take some humility from our history.  We understand from our own experience how peace and progress are rarely achieved in one moment, with one founding document, or even one founding generation.

The story of the United States is the story of men and women who have struggled, often at great cost and sacrifice, to make our founding ideals real, so that peace and prosperity are possible not only for their own time, but for time to come.

And we see in Bosnia-Herzegovina, how this struggle and journey, is not ours alone. For both our nations it is “We the People,” groups of committed and engaged citizens, who will determine whether liberty and opportunity are expanded for the next generation. It is “We the People,” who will determine whether our two countries continue their improbable journeys and live up to their incredible potential.

So this evening, let us strengthen the connections between the peoples of our nations. Let us remember that as Bosnians and Herzegovinians, and as Americans, we journey together. Let us recall our common strength and common foundation – We, the people.

Ladies and gentlemen, thank you for being with us tonight, and please welcome the U.S. Naval Forces Europe /Topside Brass Band/, and Happy Independence Day!