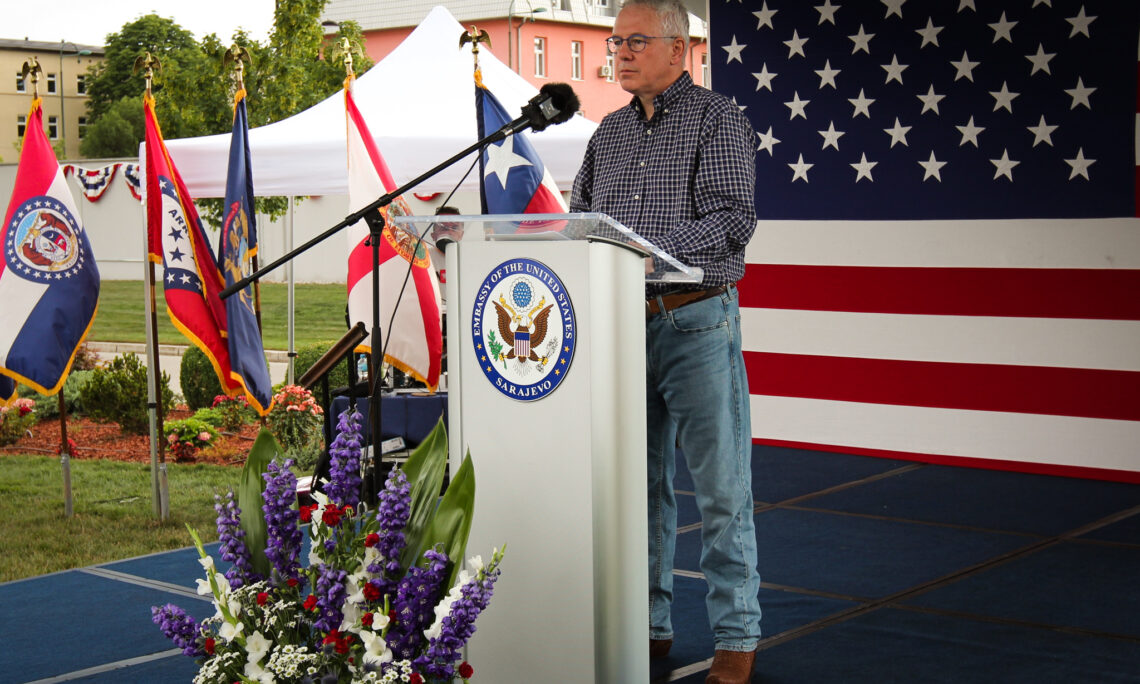 Thank you all for joining me here tonight for our first in-person celebration of the United States’ Independence Day in three years!

This celebration is particularly special to those of us who spend our lives representing the United States – because we are true believers – not just in the United States of America, but in democracy itself, which is what I want to talk about tonight.  Democracy is messy, it is hard, and it can be dispiriting, but it is the best form of government devised by mankind.

“We hold these truths to be self-evident, that all men are created equal, that they are endowed by their Creator with certain unalienable Rights, that among these are Life, Liberty and the pursuit of Happiness.”  It is with those revolutionary words that my country declared its independence 246 years ago.  And in 1776, those were very revolutionary words.

It is easy to lose sight of this fact when looking back from the 21st century, especially given the glaring gap between the ideals enunciated by our Founding Fathers and the America in which they lived.

As Frederick Douglas, the great 19th century African American abolitionist, memorably observed when speaking on the 76th anniversary of America’s independence: “The rich inheritance of justice, liberty, prosperity, and independence, bequeathed by your fathers, is shared by you, not by me.  The sunlight that brought light and healing to you, has brought stripes and death to me.”  Frederick Douglas’s words reminded his audience that America’s work was not finished in 1776.  Our work continues to this day.

Democracy is never final.  It is a continuous process of improvement, a responsibility that is passed from one generation to the next.  In the United States, the work of each generation has been guided by Thomas Jefferson’s words from 246 years ago.  These inspired the great reform movements of the 19th and 20th centuries that changed America for the better.  Just as they guide Americans in this century.

Ronald Reagan once said: “Freedom is never more than one generation away from extinction.  We didn’t pass it to our children in the bloodstream.  It must be fought for, protected, and handed on for them to do the same…”  In other words, democracy cannot survive unless the people actively nurture and safeguard it.  This requires citizens to participate in their democracy, whether in the United States or here in Bosnia and Herzegovina.

It does not matter whether lack of participation stems from apathy, anger, or complacency, the results are the same.  Democracy will break down.  It will either fail altogether, or corrupt elites will capture it for their own purposes, maintaining the veneer, but hollowing out its core.

I am certain that all of you here today want something better for Bosnia and Herzegovina – inclusive communities, a functioning government, an end to blockades, an end to nationalistic rhetoric, a great education for your children, and jobs that will make them want to stay in this country and make their futures here.  The beauty and power of democracy is that the people have the power to decide their future.

For those of you who are involved in politics, ask yourself if you are living up to your obligations, and whether you can do more to deliver the better future your fellow citizens deserve, and that you have promised to provide them.  Abraham Lincoln once said, “A statesman is he who thinks in the future generations, and a politician is he who thinks in the upcoming elections.”  At this pivotal moment in BiH’s democracy, will you choose to be a statesman, or a stateswoman?  Democracy can work only when enough of the people in charge do the right-but-hard thing in the moment it is required.

Ultimately, it is up to the people to put the leaders they want in power.  Of course, sometimes the options available to voters in a democracy, including my own, are not the best.  Not every ballot includes a statesman, or a stateswoman.  Change can take time.  Sometimes it seems like it will never happen.  Sometimes, as the people of this country know all too well, things go backward for a bit.  If your leaders are not doing what you want, vote them out.  Choose someone new.  Maybe the next person will not be a huge improvement, and if they are not, then vote them out four years from now.  Elections are not just about what politicians are telling you, but about what you are telling the politicians.

In the end, you make it work by participating, by making your voice heard, and by voting.  That is how you effect change.

That is how Americans effect change.  And if you cannot find the leaders you seek and your country needs, then you can become those leaders.  That, too, is part of the power and beauty of democracy.

With that, I ask you to raise a glass to democracy and all of its promise, and to the enduring bonds of affection between the United States and the people of Bosnia and Herzegovina!