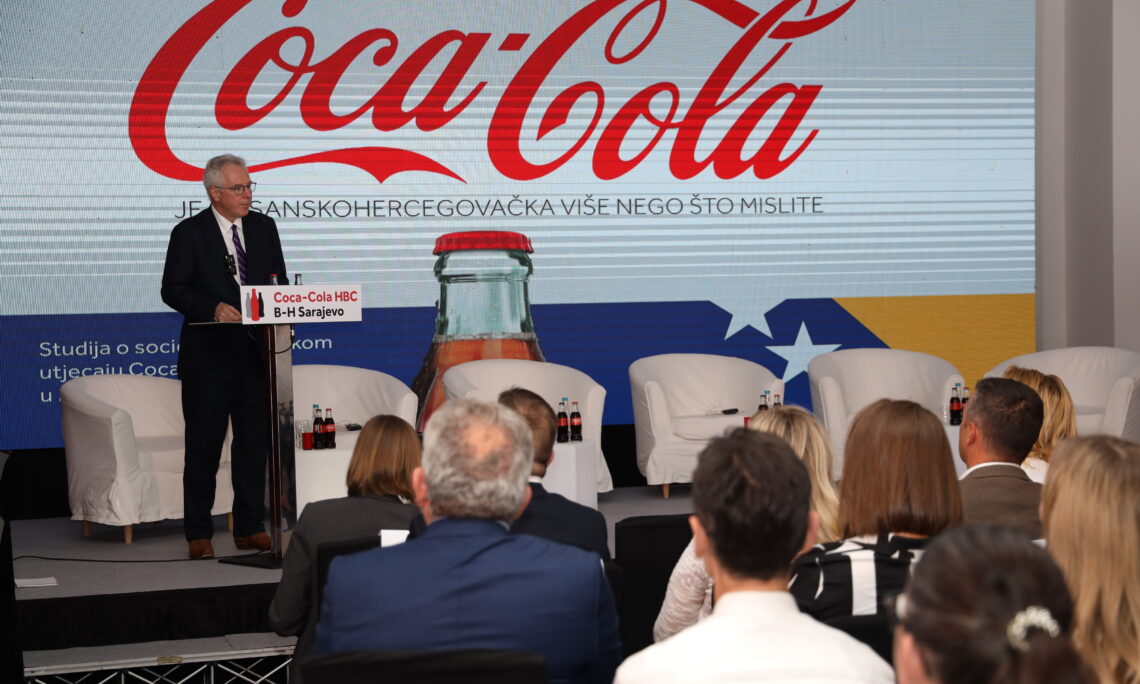 I would like to thank Coca-Cola HBC Adria for inviting me to participate in today’s event, especially General Manager Ruža Tomić Fontana.

I also want to thank Coca-Cola for being such a strong partner to the U.S. Mission in BiH over the past 25 years.  I am proud that Coca-Cola, a quintessential American brand, was one of the founding members of the American Chamber of Commerce in 2001.  AmCham has a mandate to help improve the business climate in BiH and promote American best practices, which Coca-Cola certainly does.  Coca-Cola is a model of transparency, accountability, and good governance in its business practices.  Coca-Cola also participated in the Embassy’s “Business Council on Education,” which gathered business leaders from around the country to discuss how to strengthen BiH’s education system and better prepare students for the work force.

Finally, Coca-Cola is a regular sponsor of our annual Independence Day reception.  For all of that, thank you.

Coca-Cola contributes to the community in many ways, and not just through its $50 million investment in this bottling plant.  For example, its numerous corporate social responsibility initiatives include programs dedicated to developing the workforce of tomorrow.  The company’s summer internship program is an investment in the young people of BiH, and its Youth Empowerment program makes participants more competitive in the labor market.  In a recent survey, young people in BiH listed the gap between the quality of their education and what is required to succeed in today’s job market as one of the key problems they face.  Efforts like Coca-Cola’s provide opportunities for BiH’s young people to close that gap and to build a future for themselves right here.

All of what I have just highlighted illustrates how U.S. private sector investment can be a force for good in BiH.

It underscores that high-quality foreign direct investment from a company like Coca-Cola and other American companies can bring much more than good jobs to this country.

BiH has abundant economic potential.  It has a liberal trade regime and simplified tax structures, boasts an educated workforce largely fluent in English, and borders one of the largest and most dynamic economies in the world, the European Union.  But these things alone are insufficient to foster the economic development needed to provide BiH with the living standards enjoyed across the border in the EU.

As you are all aware, BiH is a tough place for foreign investors.  Businesses looking to establish operations must scrutinize potential risks and compare them to other markets.  And I will be frank: BiH does not always stack up.  There has been about $250 million in Foreign Direct Investment from the United States in BiH since 1996.  That is good, and we are proud of the contribution American firms make to BiH’s economy, but it could be better.

Let me touch on some specific steps government officials can take in this regard.

Along with streamlining, business registration and other administrative processes must be digitalized.

The BiH Council of Ministers adopted a new draft law on Electronic Signatures in 2019, but the draft never passed the BiH Parliament because RS politicians opposed it.  Its adoption would help businesses across this country, including in the RS.  At this point in BiH’s history, pursuit of prosperity should trump petty politics.

Step two is improving the legal and regulatory environment under which businesses operate.

The inconsistency of certain regulations across BiH complicates doing business here, and this affects both domestic and foreign companies.  Harmonization of regulations in BiH with EU legislation is necessary to facilitate economic growth and tap the country’s potential for future investments.  The governments in both the Federation and the RS must also complete labor and pension reform to ease the burden on employers.  And, the entities and the state must fully implement new bankruptcy and Intellectual Property laws.

Step three deals with dispute resolution.  Even with the best legislation, disputes are a part of doing business.

Arbitration provides an alternative for investment disputes, but the Arbitration Court of the BiH Foreign Trade Chamber needs laws and regulations that meet international norms and standards as well as better-trained arbitrators.  Reform of the Civil Procedure Act, which regulates arbitration, is also a must for BiH and its entities.  The current system is fragmented, and one stand-alone arbitration act would be a boon for local and foreign investors.

For issues outside of the scope of arbitration, investors need to know that the judicial system will protect their property and investments.  Case backlogs must be cleared, judges must be familiar with commercial matters, and the courts require more transparency and accountability.  Frankly, this is where BiH’s problems are most acute.  Public trust in the judiciary, including among businesses, is at an all-time low, and for good reason.

Time and again we see law enforcement, prosecutors, and judges working on behalf of political patronage networks or for their own personal gain.

Finally, step four relates to making space for the private sector.  In BiH, over 500 publicly owned enterprises continue to crowd out private enterprise.

Political patronage networks drive the growth of the country’s inefficient and bloated public sector, draining the economy and stifling investment and growth.  Leaders should restart in good faith the privatization process of public enterprises.  A law on public-private partnerships, which has not been enacted at either the state or entity level, could also foster public private partnership on priorities like large infrastructure projects.

These four steps would significantly improve the business climate in BiH, but they, alone, are still not enough.  Endemic corruption continues to plague this country, and if this does not change, it will kill BiH’s economic future.

Corruption raises the costs and risks of doing business.  It has a corrosive impact on the broader business climate.  It deters foreign investment, stifles economic growth and development, distorts prices, and undermines the rule of law.  For too long, political leaders have stood in the way of the work needed to tackle corruption.

After a long delay, BiH finally adopted public procurement reform, but the result is a C-, not an A+.  The bill that passed is watered down and still exposes the contracting process to undue influence.  BiH has dithered in updating its Anti-Money Laundering laws, and it now faces the very real threat of being placed back on the Financial Action Task Force Grey List.  This is a step in the wrong direction that will impact international financial transactions and send a strong message to foreign investors to be wary.  More broadly, politicians continue to block passage of state and entity-level laws to prevent conflicts of interest.

In each of these examples, I am confident that you can find in the election manifestos and statements from 2018 promises by the political parties to address all of these challenges, or at least promises to improve the business environment.  The question is why, after four years, has so little been done.

Lastly, I would be remiss if I did not mention the political challenges here.

The duplicative nature of the proposed Republika Srpska-based parallel institutions complicates the investment landscape and creates more regulatory and legal confusion.  Potential investors and businesses are wise to think twice before entering such a market.

A stable and secure Bosnia and Herzegovina that is undertaking reforms to advance the country’s Euro-Atlantic integration is essential to improving the country’s business environment, as well as its overall image among American and other foreign investors.  The journey to Brussels may take time, longer than many, including the United States, would like, but the benefits of the reforms the EU is urging are immediate.

When U.S. companies see BiH taking serious steps to improve the business environment, to reduce corruption, and to end political instability, they will be much more likely to invest here.

The United States is a committed partner to BiH and to the private sector here.  We see a growing economy fueled by the private sector as key to the country’s future success, and we have invested significant time and resources into making BiH a better place to do business.  I can assure you that the U.S. Embassy will continue to support Coca-Cola and other American investors, exporters, and brands that are contributing to your country’s economic development.

In turn, I encourage respected American companies like Coca-Cola to use their influence to lobby leaders and officials to accelerate the reforms needed to facilitate private sector growth.  Right now, while all eyes in the country are on the October elections, the timing is perfect for the business community to speak up about how to move the country’s economy forward.

Investors should also speak frankly about how corruption and government dysfunction impact their ability to do business in BiH.  The more all of us highlight how corruption is robbing citizens of their futures, the more the voters will demand accountability and change.  Now is the time to engage.

Thank you again for inviting me today.  I wish Coca-Cola continued success, and I offer my assurance that the U.S. Embassy is committed to supporting your business in Bosnia and Herzegovina.