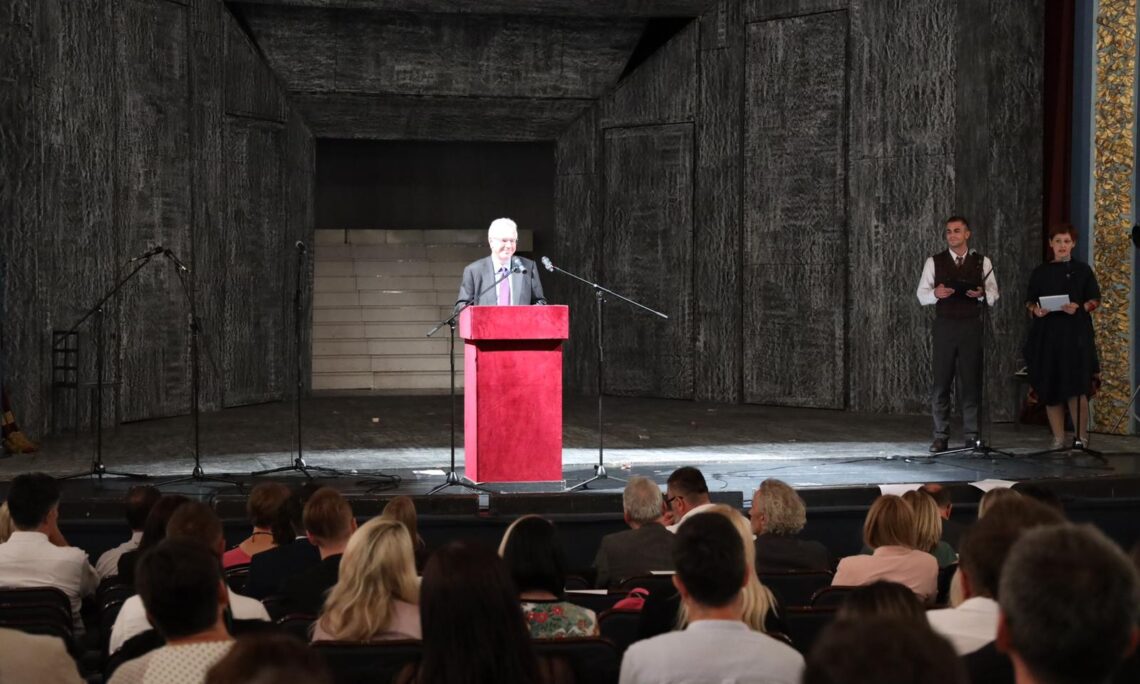 Distinguished guests, ladies, and gentlemen.  Thank you for your warm welcome.  It is an honor and privilege to be here for the tenth annual Investigative Journalism Awards Ceremony.

A free and independent press is a cornerstone of democracy.  At its best, it ensures that a country’s government functions openly and transparently, and that rules apply equally to everyone.

The best investigative journalists, like those we celebrate tonight, hold everyone accountable.  To paraphrase one of my favorite American journalists, Jonah Goldberg, those we honor tonight understand that their mission is not to defend “their” side, or to avoid reporting that lends aid and comfort to the “other” side.  The focus is, and must be, on the truth.

Washington Post reporters Bob Woodward and Carl Bernstein became American heroes when they first reported on a break-in at the offices of the Democratic National Committee at the Watergate Hotel in Washington, DC, in 1972.  Their reporting linked President Richard Nixon to these actions and ultimately ended his presidency.  Woodward and Bernstein are celebrated in American culture now, but their actions were not without risk.  That is as true for investigative journalists today as it was in 1972, as all of you in this theater tonight know.

The Chinese journalist, Zhang Zhan, was arrested and jailed for her reporting on COVID-19, which her government wanted to suppress.  Filipina journalist Maria Ressa was arrested for her reporting on former president of the Philippines, Rodrigo Duterte.  Russian journalist Dmitry Muratov was threatened by Russian authorities, and several journalists from his newspaper have been killed for their work exposing the actions of the Russian government.  Ressa and Muratov won the Nobel Peace Prize in 2021 “for their efforts to safeguard freedom of expression, which is a precondition for democracy and lasting peace.”

Like Zhang, Maria, and Dmitry, Bosnia and Herzegovina’s investigative journalists experience political pressure and are threatened because of their work, not least because one of the most important topics they investigate is corruption.  Corruption is so pervasive here that many citizens hold out little hope for change.  I understand their frustration, and I understand why far too many are passing judgment on their political leaders by leaving Bosnia and Herzegovina to build a better future for themselves and their families elsewhere.

But, tonight, we have a reason to hope for change.  We see in the reporting of those we honor this evening the commitment to fight back, even against great odds, to make a difference for all the people of Bosnia and Herzegovina.

Citizens have a right to objective information about the performance of their elected leaders and their state, entity, canton, and municipal governments.  The more people can access reliable and objective information, the more they are equipped to make informed choices and hold their leaders and their governments accountable.  That is especially important in an election year.  Your work has provided that.

Your work has revealed politicians committing fraud to secure university scholarships for their children.  It has exposed deception in the awarding of government procurements, and it has uncovered the selling of medical high school diplomas.  Your work has raised important questions about “secret” contracts and the non-transparent use of public funds.  These examples and many more underscore the value of investigative journalism, and all of them are worthy of recognition.

To the brave journalists here tonight, I know – the United States knows – that it is difficult to stand up in the face of concerted efforts to silence you.  When you uncover corruption, abuse of power, or misuse of public funds and property, you are often accused by those you expose of creating tension in BiH.  You are labeled “traitors”, and you are often threatened.  The subjects of your reporting, whether politicians or other corrupt actors, will subject you to politically motivated, expensive, and lengthy defamation lawsuits with the goal of preventing you from doing your jobs.  We have defended you against these attacks.  We have stood with you, and we will continue to do so.

I admire and applaud your tenacity and your perseverance.  Challenging ethnonationalist politicians and exposing corruption and organized crime takes nerve, fortitude, and an unflinching dedication to telling the truth.  As I said when I opened my remarks, you are heroes, and it is fitting that you are recognized as such.

To the editors and media representatives here:  I want to thank you for providing your journalists with the means to develop accurate, well corroborated stories and to report them to the public.  I hope you will continue to support and enable your reporters to do the investigative journalism that is so important to this country and its citizens.  They deserve nothing less.

To tonight’s winners:  Enjoy tonight and celebrate yourselves and your work.  There will be plenty of stories to cover tomorrow.  And, I look forward to reading them.

Thank you all and good night.