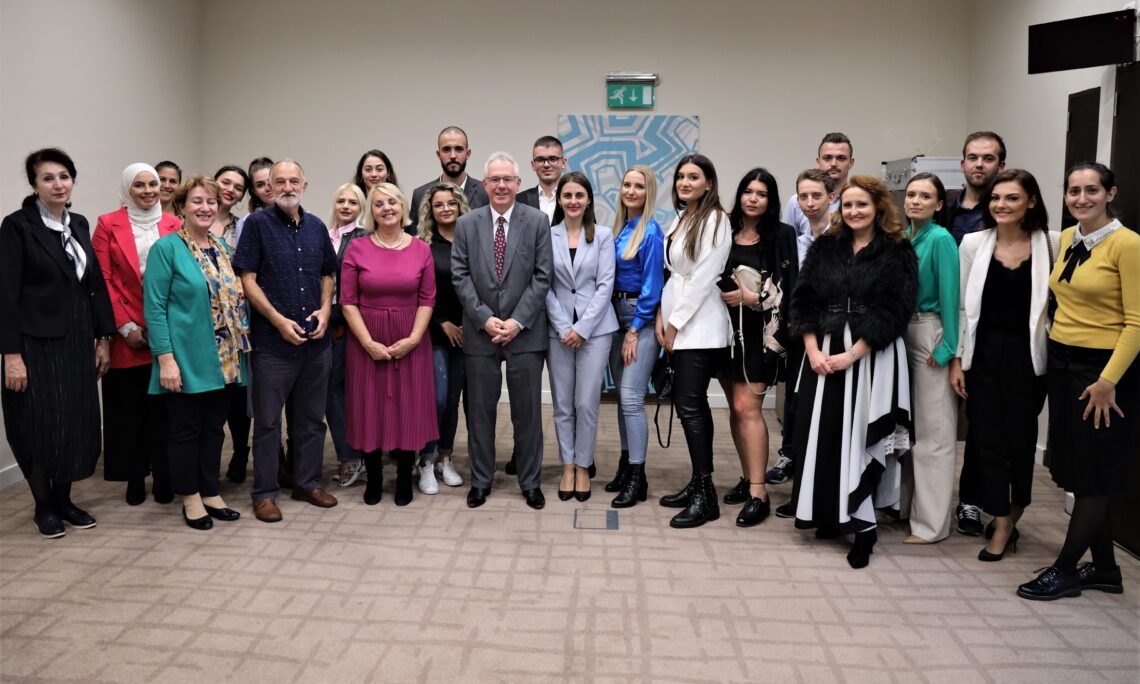 Good afternoon, everyone.  Thank you for your warm welcome.  It is an honor to be here for today’s Journalism Academy Award Ceremony.

I would like to extend heartfelt congratulations not only to those who received awards today, but to all of you participating in this program.  I am looking forward to our discussion later, so I promise I will not speak too long.  But I do want to take this opportunity to talk about reconciliation and about the role that you – young journalists and students in Bosnia and Herzegovina – can play in turning this country around.

The 1992-1995 war in BiH was a tragedy.  One hundred thousand lives were lost, and horrible, criminal atrocities were committed, including genocide.  These wounds from the war have not healed, and if they do not, the people of Bosnia and Herzegovina will not enjoy the stable, democratic, and prosperous future that they want and that they deserve.

Accept and acknowledge the facts, teach the truth to future generations, honor the victims, tirelessly work to locate, recover, and identify the missing, and vigorously investigate and prosecute the suspects who still walk among us.  This is the only road to a future that reconciles the people of Bosnia and Herzegovina, that heals and binds the wounds of this country, and that guarantees a just and lasting peace between the children and grandchildren of those who suffered and died between 1992 and 1995.

This future is impossible if Bosnia and Herzegovina’s political leaders continue to use their positions to divide rather than to reconcile.  The rhetoric over the last few weeks of the election campaign amply illustrates the problem, but Bosnia and Herzegovina’s political leaders have been using their bully pulpits to divide the people of this country and to generate fear for much longer than three weeks.  It has gone on for years.  It is easy to become numb to it, to dismiss it as “just the way things are here,” and to assume that the consequences of it are, or will be, minimal.  This is a mistake.

The social fabric in Bosnia and Herzegovina is fragile to begin with.  It is unreasonable, indeed illogical, to expect it to withstand a daily pounding from the country’s leaders day after day, month after month, and year after year.

It falls to your generation – a generation not yet born during the war, which bears no responsibility for the crimes committed during it or the many problems Bosnia and Herzegovina faces today – to save the day and cure the country’s ills.  This must include charting a course towards reconciliation.

That is a tall order, and many young people are rejecting that call to action.  I understand their frustration, and I understand why far too many citizens have lost faith in their political leaders and are leaving Bosnia and Herzegovina to build a better future for themselves and their families elsewhere.

But I am hopeful.  Especially when I see a group of young journalists like yourselves tackling the issue of reconciliation.

In that context, I have two simple and yet extremely demanding requests for you today:

Number one – dedicate yourself to finding out the truth and have the courage to report it.  Your investigations must serve the public interest first and foremost, not a particular ethnic or political narrative.  Your stories must take an unflinching look at painful issues because it is only by doing so that Bosnia and Herzegovina can heal.  You will be criticized for doing this – and at times, the criticism will seem unbearable – but if you are a journalist, it is you job to do it.

Number two – report respectfully about the victims of the war regardless of their ethnicity or where their suffering took place.  I think you will find that whatever the horrible particulars about a specific incident that there is also, across Bosnia and Herzegovina, much shared pain and suffering.  There is no hierarchy of victims.  Some crimes are objectively worse than others, and should be recognized as such, but the mother who lost a son or daughter, the wife who lost a husband, the internee who was beaten and tortured, and solider who was summarily executed – they are all individuals.  They are all fellow, human beings who did not deserve their fate.

Reporting the truth is not easy but take heart and emulate the courage of the heroic journalists throughout history who dared to take on forces greater than themselves to report the truth.  American journalists such as Upton Sinclair, Ida B. Wells, Carl Bernstein, and Bob Woodward were all attacked, even despised, when they first published their stories.

However, those stories changed public perceptions on serious issues such as the inhumane working conditions in the meat-packing industry, the horrific violence against African Americans during the era of lynching, and the corruption of a sitting U.S. president.  Those stories changed history, and they made America a better place.

Here in Bosnia and Herzegovina, some of your senior colleagues have done courageous investigating and reporting on war crimes, for example about Kazani and about Koricanske stijene.  Their reporting exposed the truth and brought respect and dignity to the innocent victims.  And by doing both, they contributed to reconciliation.

I realize that in today’s Bosnia and Herzegovina, the political discourse makes it unpopular to embrace diversity, to go beyond nationality and religion, and to recognize the common humanity and multiple identities of the country’s citizens.  But, if we are honest with ourselves, the latter is the essence of Bosnia and Herzegovina’s culture and heritage.

As journalists you can help renew connections and tear down divisions.  As evidenced by today’s awards and the hard work you have done in this program, I have no doubt that you are up to the task of playing a positive and prominent role in the future of Bosnia and Herzegovina.

I would like to close with something the late Archbishop Desmond Tutu once said: “Reconciliation is not about being cozy; it is not about pretending that things were other than they were.  Reconciliation based on falsehood, on not facing up to reality, is not reconciliation at all.”

I wish you the best of luck, and congratulations.