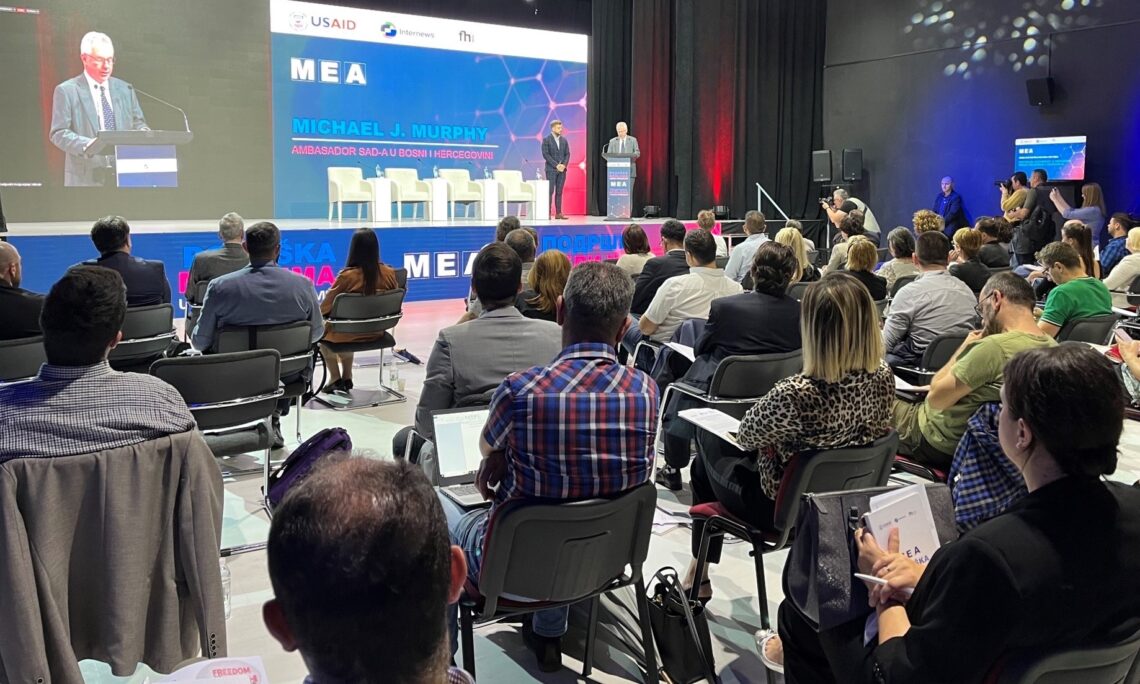 It is an honor and a privilege to join you here today.

I want to use this opportunity to underline the importance of a sustainable, independent, balanced, and fact-based media as one of the cornerstones, perhaps the cornerstone, of a prosperous, well-functioning democracy.  This is important for any country in the world, but particularly important for post-conflict countries like Bosnia and Herzegovina.  Media matters.

As you all well know, democracy requires an informed and active citizenry willing to participate in governance processes.  This is not a new discovery.  My country’s third president and the principal drafter of our Declaration of Independence, Thomas Jefferson, said it more than 200 years ago.  “An educated citizenry is a vital requisite for our survival as a free people.”  In the 21st century, an independent media plays a critical role educating the citizens of every democracy.

Enemies of democracy fear an independent media.  They want to control the messages sent to the public, and they work hard to undermine, if not outright destroy independent media.  We have seen that here in BiH.  My government has responded by supporting programs to strengthen the capacity of independent media for newsroom and business management as well as for the domestic production of TV programs.  We have also worked to improve the legal and regulatory environment within which independent media operates.

The polarization of the political climate in BiH, the entrenchment of vested political interests, and growing corruption across the country are placing a tremendous strain on freedom of the press.  This should concern everyone who lives in BiH.  The press, too, has its own unique duty to sustain media freedom and its own credibility.  Several outlets practice so-called “patriotic journalism” and focus themselves on presenting – uncritically – a single viewpoint.  I would argue that this is inconsistent with the media’s responsibility to provide multiple viewpoints and help educate the BiH citizenry so that this country’s democracy can function as  it was intended.

I want to be clear about what I am not saying.  All media have a duty to cover what the BiH’s political class is doing and saying, even, in fact especially, the unsavory rhetoric and actions.  The media investigates and informs; it does not ignore.  You are the professionals but let me make this one observation with respect to your profession:  An outlet that merely reports what its favorite politicians or government officials are saying is not really practicing journalism.  In the end, the test of an outlet’s integrity, of its commitment to independent journalism, and of its support for media freedom is whether it is willing to challenge all politicians and government officials wherever they or the outlet are based.  That includes us diplomats, too.  The international community deserves the same sort of scrutiny and questions that you should be directing at local figures, the politicians, here.

I do not want to paint too negative a picture.  As Archbishop Desmond Tutu said, “Hope is being able to see that there is light despite all of the darkness.”  BIH’s media landscape contains several beacons.  I commend all the brave journalists who, often at great personal risk, stand up to and expose the most severe cases of corruption and other crimes.  The stories of corruption they expose take guts, determination, and a lot of hard work, but these individuals possess more than just courage and integrity.  They have a love of country, of their fellow citizens.  They are true patriots.  Everyone living in BiH should be proud of and support their work.

The media in BIH needs the resources and expertise to produce more, bold, revealing stories like those these courageous journalists have written.  The media teams producing them also need protection against physical attacks and threats.  They need advanced digital security to keep their resources and data from prying eyes whether domestic or coming from foreign malign actors.  They need solidarity and support from their peers and local organizations against online hate attacks and cyber-harassment.  And they need robust legal assistance to protect them when they are unjustly targeted through the courts something we have seen people make use of more and more in BiH

Today, we are here to give our full support to BiH’s professional media with the launch of the United States’ new Media Engagement program.  This program will strengthen the sustainability of the independent media sector across BIH – Sarajevo, Banja Luka, Mostar, Trebinje, Bihac.  It will provide outlets and media partners with more substantial and stable resources to operate as viable enterprises, expand their audience and reach, and foster strong partnerships to resolve common challenges, particularly in the digital space.

The media have the responsibility to remain professional and independent – that holds true throughout the world.  I want to stress another point here.  The front page and the editorial page are different. The front page, the newscast, is where the news goes, where all the perspectives go.  The editorial page is where you present your views.  Outlets across the world are allowed to present their views and present their analysis.  It happens in the United States, we have left leaning news outlets and we have right leaning outlets, but the test of the integrity of these news outlets is how they manage their front page – are they presenting facts, are they challenging the people they agree with, not just the people they do not agree with, are they holding these people accountable?  Are they holding these individuals accountable, exposing the differences between what they promise and what they do?  Democracy depends on all of this – in all of its messiness, and sometimes it is messy.  I know you have the talent and capacity to strengthen a free press in BiH, to ask tough questions of local actors, international actors and others on the BiH scene.  My government, my mission stands ready to support you and your fight for truth and transparency.