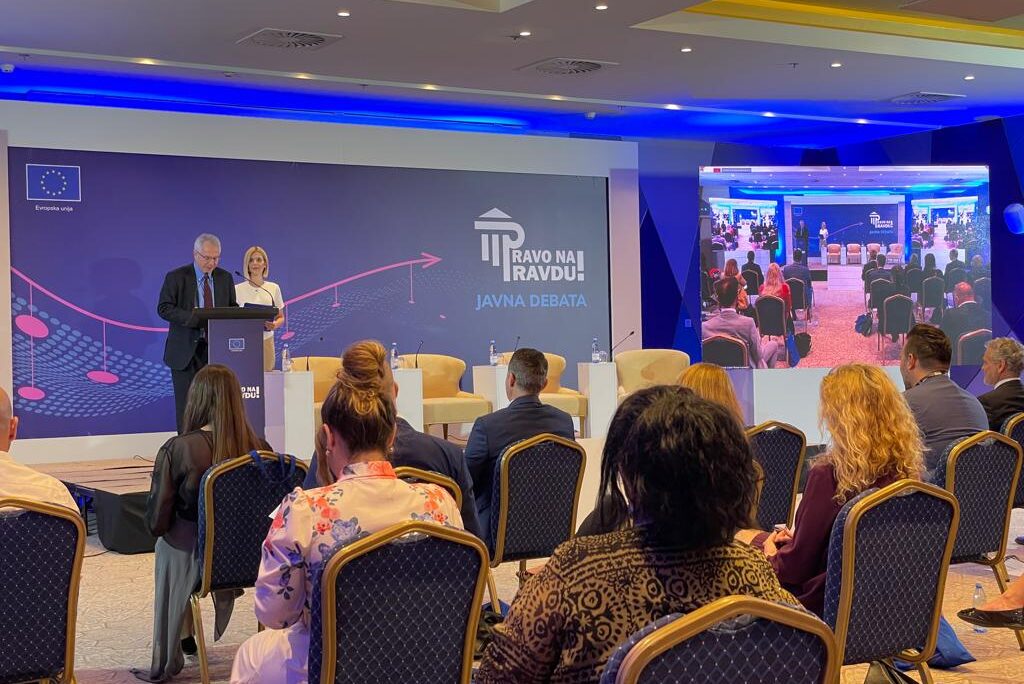 Thank you, Ambassador Sattler for the invitation to speak today and for the warm welcome.  Commissioner Varehelyi, Minister Zadic, distinguished guests, colleagues, and especially the people of Bosnia and Herzegovina, it is my honor to speak to you today to discuss implementation of the recommendations of the Priebe Report, and the overall state of the rule of law in BiH.  Unfortunately, the picture is not a pretty one.

We are here today because we all care about BiH’s future.  We want to see BiH take its place within the Euro-Atlantic community of nations.  We want to see efficient and effective institutions at the state, entity, canton, and municipal levels that serve the public.  And we want to see a strong, private-sector driven economy that provides prosperity for the country’s talented people.  All of this is impossible without the rule of law.  The 2019 Priebe Report made a clear set of recommendations for improving the rule of law in BiH.

At this session of Pravno na Pravdu, it would be wonderful if we could highlight deep respect for the rule of law in BiH; if we could discuss the successful adoption of the Priebe Report’s recommendations; and if we could celebrate implementation of the European Commission rule of law priorities outlined in its 2019 opinion.  Unfortunately, we cannot do any of these things.  Instead, we must once again note that respect for the rule of law is not entrenched in the fabric of this country’s society, not sufficiently promoted by this country’s governments, and not respected by the country’s ruling elite.

In fact, you can argue that since 2019, BiH has moved in the wrong direction on the rule of law.  Let me provide just one example.  Earlier in the year, we applauded initial progress in the BiH House of Representatives on legislation related to Conflict of Interest, Public Procurement, and amendments to the High Judicial and Prosecutorial Council.  All three pieces of legislation are critical to the rule of law in BiH and to advancing the country’s aspirations to join the European Union.  Yet, what does the House of Peoples do?  It voted against the legislation.  Worse, the parties voting against the legislation claim they are the country’s biggest proponents of the rule of law and of EU integration.  The hypocrisy was there for all to see.  You cannot credibly claim to be a champion of the rule of law and EU integration while casting votes against the adoption of fundamental rule of law reforms that everyone agrees is necessary and that the EU requires.

Why did certain parties oppose the legislation given their professed commitments and promises to their voters?  Well, they explained, the legislation had originated in the House of Representatives, not the Council of Ministers.  Since it had not come from the governing coalition, they, as members of the governing coalition, could not support it.  I would ask everyone to pause for moment and let that explanation sink in.  If I were a voter, the questions I would ask after hearing it are: First, “Well, why didn’t you draft the legislation yourself?  And second, “What have you been doing in government over the last four years, if you haven’t been focusing on making improvements to the rule of law and advances towards Europe that you had promised to us?”

Over the last ten years, BiH’s score on Transparency International’s Corruption Perception Index has dropped steadily.  It now sits at 35 out of 100, with 0 meaning highly corrupt and 100 very clean.  BiH hovers just above the bottom third of the list.  Data from USAID’s 2021 Judiciary Effectiveness Index, a tool developed to monitor and evaluate judicial performance, shows that corruption-related indicators are at their lowest since the Index’s inception in 2015.  In other words, the public believes that the judiciary handled corruption better six years ago than it does today.  The is no way to sugar coat this.  Those are bad numbers.

Here is another data point for you.  The online public procurement monitoring portal, Pratimo Tendere, identified as “risky” 90 percent of public procurements between October 1, 2020, and September 30, 2021.  That is, they deemed 90 percent as of them as highly susceptible to corruption.  The value of these procurements was 138 million marks.  That money belongs to the people, not the politicians.

Citizen surveys conducted by the National Democratic Institute consistently show that the people of BiH rank corruption as the one of the biggest problems facing the country, after unemployment and politics, both of which are intertwined with the country’s corruption woes.  How are the people of BiH responding to this situation?  Many of them are picking up and leaving the country.  Between 50,000 – 55,000 BiH citizens emigrate annually.  They want a better life for themselves and their children.

Politicians are not fixing this problem.  In fact, they actively maintain the system that perpetuates corruption.  Why else would the House of Peoples block the law regulating conflict of interest, the public procurement law, as well as amendments to the HJPC.  Furthermore, the blockade in the Federation of BiH meant the government did not adopt the Law on Protection of Corruption Reports.  Citizens deserve better than obstruction from their political leaders.  This behavior has real life consequences for BiH’s citizens.

There are people in this country who are genuinely committed to the fight against corruption and who work every day to support the rule of law.  In the face of what appear to be insurmountable odds, they have displayed and continue to display outstanding courage, dogged persistence, and remarkable capacity to stand firm in the face of adversity, including threats from the powerful.

These anti-corruption heroes – citizens, civil society organizations and investigative journalists, and a few government officials – set an example for all of the country’s citizens.  Their message is clear:  that you do not have to accept the status quo, that you can, through civic engagement, or if you are in government by performing your job with integrity, positively shape this country’s future.

The Center for Civic Initiatives supports citizen activists who fight corruption in their own communities.  I recently met with citizens who are fighting the illegal construction of hydroelectric dams, illegal residential property construction, and the illegal use of land as waste dumps.  In each instance, the government refused to follow procedures which would have allowed citizens to voice their concerns.  Now, people are fighting back.

I have spoken with investigative journalists in Sarajevo and Trebinje who shared similar experiences related to uncovering corruption and corrupt actors.  After exposing malign actors, they become the targets of harassment, threats, and lawsuits.  Despite this, they courageously persevere.  Prosecutors and judicial authorities should demonstrate similar courage and integrity by formally investigating what these journalists have uncovered and putting the guilty behind bars.

Not all those who fight corruption operate outside of BiH government structures.  Erduan Kafedžić, the head of Sarajevo’s Anti-Corruption Office, works tirelessly, and at great personal risk, to push back against corruption.  Sadly, he has become a marked man for doing so.  Yet, he continues to fight.  Similarly, Sarajevo Police Commissioner Nusret Selimovic continues to take steps to root out corruption in the Canton and within his own force.  His good work has not gone unnoticed by those who have something to hide, and he too has come under threat.

There are similar stories of other champions from throughout BiH.  Courageous people committed to a better future for themselves, their families, and their communities who persist in their efforts despite the obstacles and threats.  The United States, along with its partners in the international community, are proud to stand with and support these heroes.

It is imperative that BiH address the lack of progress on rule of law reforms and tackle corruption.  This will require governments – at all levels – to take their responsibilities more seriously than they have to date.  This is not just about the passage of this legislation.  Actual implementation of laws is of equal importance.  Citizens who see enough change to believe that the rule of law can improve, and that corruption can be uprooted will see a future for themselves and their families in BiH.  And they will stay here.

I have great hope yet for BiH and the future we all know it deserves.  This is a remarkable and resilient country, but it is also a troubled one.  Acknowledging these blemishes is the only way we remove them.  Giving them a name and identifying where they come from is the first step in taking away their power.  Thank you