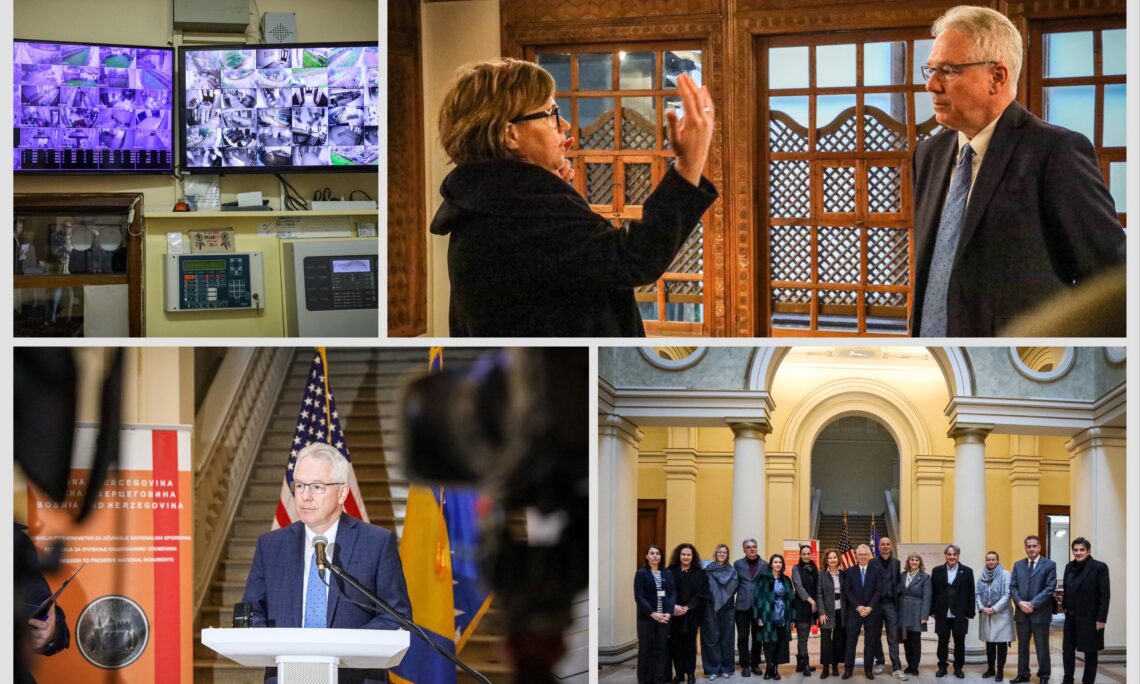 Closing of a seven-year conservation and renovation project at the National Museum of Bosnia and Herzegovina, funded in part by two large grants totaling over $1 million from the United States’ Ambassadors Fund for Cultural Preservation (or AFCP).

I am delighted to be here today to mark the closing of a seven-year conservation and renovation project at the National Museum of Bosnia and Herzegovina, funded in part by two large grants totaling over $1 million from the United States’ Ambassadors Fund for Cultural Preservation (or AFCP).

Since 2001, the United States, through the AFCP, has provided more than $2 million in funding for 22 projects dedicated to preserving cultural heritage in Bosnia and Herzegovina.  Among these projects were the restoration of part of the historic Jewish cemetery in Sarajevo; the reconstruction of the structural foundation of the Ferhadija mosque in Banja Luka; the restoration of an Orthodox and a Catholic Church near Mostar; the reconstruction of part of the historic building that houses the Museum of Contemporary Art of Republika Srpska; and of course, conservation and reconstruction work here at the National Museum of Bosnia and Herzegovina. This project started in 2015 and supported improvements to the building’s structure, storage for artifacts, and updates to the electrical, water, security, and sewage systems.  These repairs made it possible for the main pavilion where we are gathered today to house safely this impressive permanent exhibition of prehistoric artifacts.

Collections like those here in this museum and other heritage sites across the country are a testament to the rich culture and history of Bosnia and Herzegovina and to all the people who have called it home.  Too often in Bosnia and Herzegovina heritage is used as a tool to divide the country.  This is both irresponsible and wrong. For the people of Bosnia and Herzegovina, this heritage is shared and part of a common history whether you live in Banja Luka, Sarajevo, or Mostar.  This shared past is readily apparent to visitors to your country.  We marvel at the glories of the Gazi Husrev-bey Mosque, the lineage of Tvrdos Monastery, which sits on the foundations of a fourth century Roman church, and the beauty of the walled city and fortress of Jajce, a place that features prominently throughout the history of Bosnia and Herzegovina.  Indeed, these sites and many others belong to all the people of this country, as do the exhibits in this hall.  And the stories of these sites and this museum’s exhibits are interwoven.  There is no escaping that.

As hard are some may try, and many do try, you also cannot change the past.  The hard facts of history, especially shared history, are hard facts.  You can deny them, but they are immutable, and they always reemerge.  My country has some experience with this, too.

The preservation of cultural heritage helps people connect with the past, and in the case of physical structures, it allows them to literally occupy it.  If done right, it provides a foundation for a conversation about the past that can illuminate the present and build shared understanding.  Recognizing, protecting, and celebrating all elements of a country’s shared cultural heritage can also contribute to Bosnia and Herzegovina’s ongoing efforts of reconciliation.  In today’s Bosnia and Herzegovina, all of this has never been more important.

I want to commend the Commission to Preserve National Monuments, which has done a tremendous job as our implementing partner for the grants for the National Museum.  The Commission has a leadership role to play regarding the preservation of Bosnia and Herzegovina’s cultural heritage.  Its work is too important to be set back by political agendas and infighting.  We have called on political leaders to work together and form functioning institutions – and this applies to all institutions, including the Commission.

I congratulate the Commission and the National Museum on the completion of this project and look forward to opportunities for continued partnership.  The United States remains dedicated to supporting the preservation of Bosnia and Herzegovina’s cultural heritage.

Thank you – and I look forward to touring the museum to see the results of your hard work!