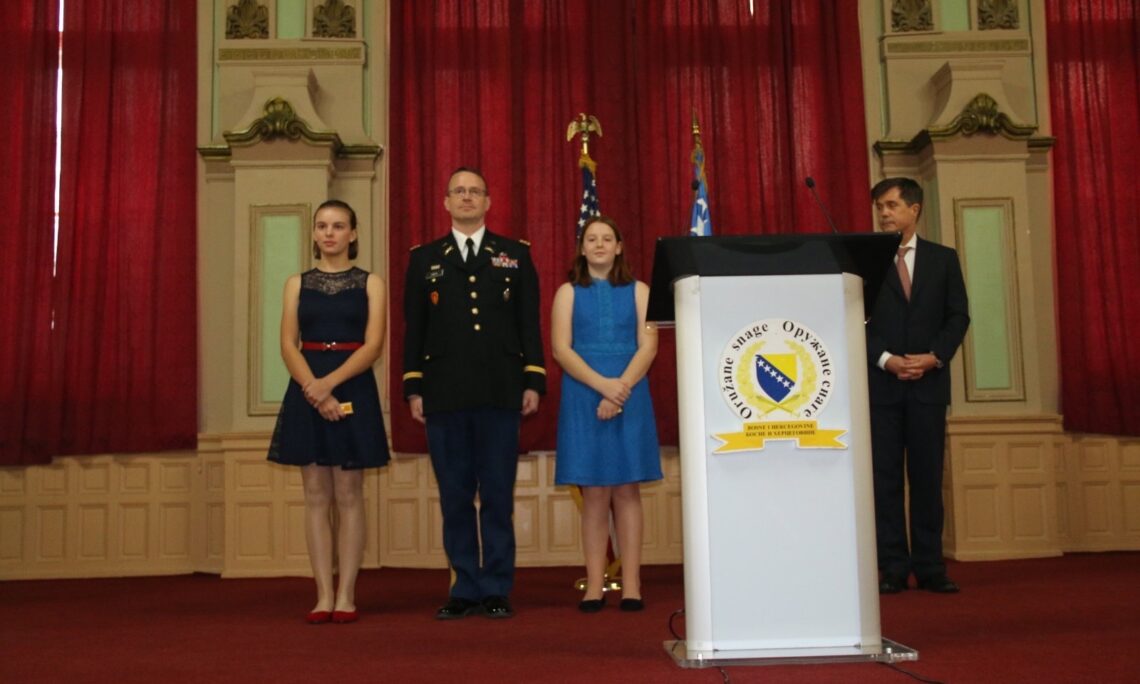 It is a pleasure for me to have the opportunity to mark this major milestone for Lieutenant Colonel Shea and his family. Making it to Lieutenant Colonel is the mark of a successful career. Many officers never make it that far. Fewer still are selected to promotion to Colonel. The promotion we are about to witness is a testament not only to Corey’s achievements in the Western Balkans but also to his proven potential throughout his more than 22 years of military service.

Corey started his journey with the U.S. Army on May 31st, 1997. That date precedes the births of some of our Marine Security Guards at the US Embassy. He was a tank platoon leader, a scout platoon leader, and he commanded two different companies. After his second command, Corey began his journey as a Foreign Area Officer, and he and his family have lived the “Foreign” part of that title for the better part of his career.

In total, Corey has spent 13 of his 15 years as a Foreign Area Officer outside the U.S., serving in Poland, Germany, Afghanistan, Serbia, and now Bosnia and Herzegovina. In every location, he served with distinction and worked tirelessly for the good of his nation and its people.

I’ve seen Corey in action for just about a year, and he showed quickly what a great asset he has been to our Mission. I am happy to see that the Army recognizes the same potential in him that I see and that the many colleagues and partners here today see. I am always happy to go where Corey asks me. To school openings in Doboj, Maglaj and Brod, to a Humvee donation ceremony at Rajlovac, to our air-ground integration exercise in Tuzla and most recently to a ceremony here in the Army Hall marking the purchase of helicopters for the Armed Forces of Bosnia and Herzegovina. And when he brings me a pen and proposal, I’ve learned it’s a good idea to sign his winning proposals. We gained more than $49 million in U.S. funding on five proposals to support our efforts here — a 100% success rate.

Speaking of families, military service and the foreign service both are family affairs. Our spouses and families travel with us from post to post, uprooting themselves from everything they know to travel to some unknown land where they have to find new friends and new lives, and they have to do this every few years. I know that Corey could not have achieved success in his career without their support, and I think they have earned this as much, if not more, than he has. Corey’s wife Aleksandra, his older daughter Natalia (who celebrated her 14th B-Day last Monday), his younger daughter Tamara, mother-in-law Dragica, and his parents Tom and Margie.

You share in the prestige and importance of your husband’s, son’s, father’s, and son-in-law’s rank, and I thank you for the sacrifices you have made to help him earn it.

The Army officially promoted Lieutenant Colonel Shea on the 1st of January, which means he has had a uniform deficiency for 15 days now. It is time to correct that. Thank you all for coming, and at this time I invite Corey’s family to join him and pin on his new rank as the orders are read.