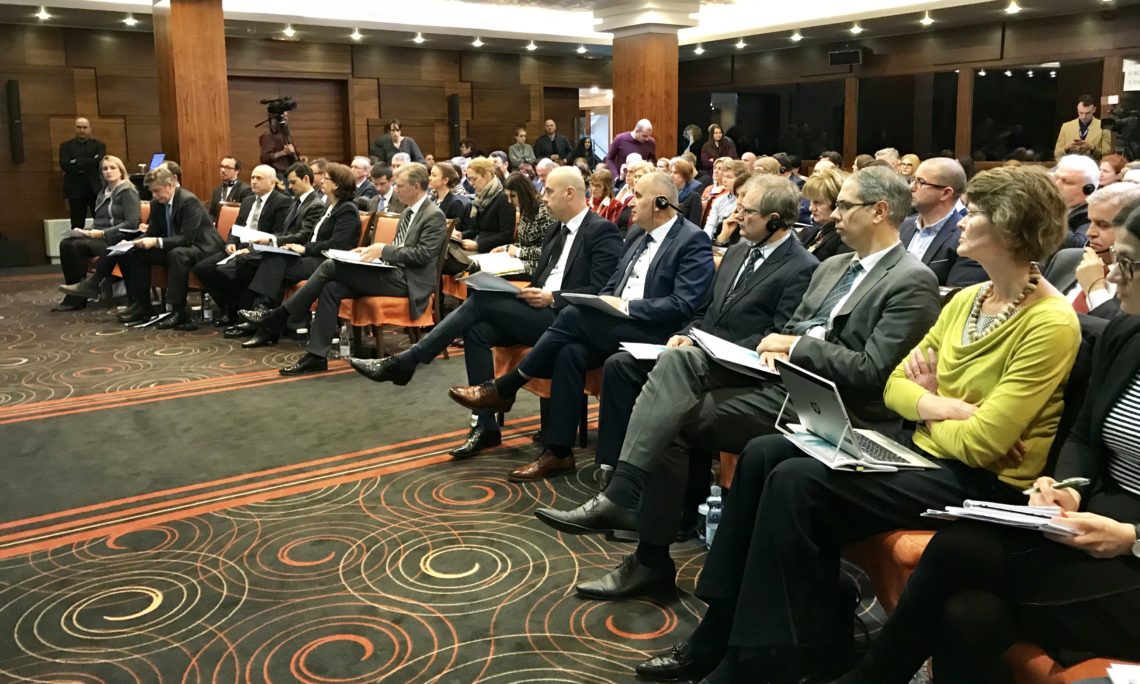 It’s my pleasure to be here today to help publicize the OSCE’s report on corruption trials.  It’s important that we use this opportunity to talk about how corruption hurts everyone in BiH.  Over the past year, the OSCE, using over $470,000 in funds donated by the United States, has systematically monitored about 160 corruption trials in Bosnia and Herzegovina, with an emphasis on high and medium level corruption cases.  This hasn’t been done before here.  The report’s observations and recommendations are essential in identifying both the problems in BiH’s legal system when it comes to dealing with corruption and recommending solutions.

Let’s be clear: corruption hurts everyone in BiH.  It threatens economic development, undermines institutions, and endangers the rule of law.  I know that’s not news to you, but we need to emphasize it, especially today.  Prosecuting corruption is the key to ensuring the rule of law and thereby a prosperous future.  The strong rule of law is the backbone of every free and democratic society.  The OSCE report shows – clearly, precisely, and undeniably – that the legal system in BiH is not effectively dealing with corruption.  I need to stress that this failure to effectively combat corruption hurts everyone in BiH.  The good news is that we now have concrete recommendations on how to overcome those failures.  That’s what the OSCE’s report offers: a bird’s eye view of this maze of corruption, and a clear way forward.

The Problems in the Judiciary

So what are the problems in the judicial system?  The report identifies several key concerns.  Today, I want to focus on two:  First, the report clearly shows that too many prosecutors aren’t drafting quality indictments.  The result is that corruption cases fail in part because of poorly written indictments.  The people of BiH deserve better.  Corruption prosecutions must be a top priority for prosecutors and they cannot fail for lack of basic technical skills.

Second, the report reveals shortcomings in the judiciary when processing corruption cases.  Too many judges aren’t scrutinizing indictments and they aren’t applying or interpreting the law in a reasoned, consistent way.  Additionally, judges deliver sentences in corruption cases that are too lenient, and without sufficient legal justification.  We all know that independent, capable judges are essential to a strong legal system in BiH, and that their judgements carry the force of the law.  It is imperative that their verdicts be well-reasoned, based on the law, and cite supporting evidence.  Doing so results in more consistent case law, and that builds a strong rule of law.

No One Should Be Above the Law

While some of these gaps can be addressed with training, I fear that there are other reasons responsible for the poor processing of corruption cases in BiH: that is, political influence.  Although the report does not claim this, the implication is obvious: some officials are treated as if they were above the law.  So let me be clear:  no one should be above the law.  BiH must achieve a government ruled by law, not men.  Unfortunately, in BiH, men — not institutions and transparent procedures — decide what “justice” means in BiH.  Justice cannot be reserved only for those without political connections.  Justice cannot be influenced by money or bribes.  Justice cannot take the back seat to power or influence.  There can be no justice for anyone unless there is justice for everyone.

The HJPC Must Resist Political Influence

So what is the solution?  I’m happy to say that there are several.  First, there are talented, hard-working prosecutors and judges in BiH, and I urge them to keep at it.  Second, the OSCE’s report lays out a clear path forward to tackling each of these problems I discussed a few moments ago.  But the key is for institutions like the High Judicial and Prosecutorial Council to vigorously and impartially ensure that corruption does not go unchallenged in BiH.  The HJPC has a leading role in ensuring the judiciary acts in the interest of the public.  Unfortunately, the HJPC has often acted against its own mandate, allowing politicians to interfere in selecting, disciplining, and dismissing judges and prosecutors.  This is unacceptable.  The HJPC must be independent, but it must also be accountable.  Not to the politicians with a stranglehold on power in BiH, but to the people whom the judiciary represents and serves: the citizens of BiH.

There is No Time to Waste

I urge all judicial institutions in BiH, and especially the HJPC, to use this report and its recommendations to strengthen the rule of law and justice in BiH, and start now.  There is no time to waste.  As always, the United States remains committed to BiH, and to ensuring that everyone is treated fairly and equally before the law.  We want to work with you, and will continue to do so to ensure BiH has the judicial system and rule of law it deserves.