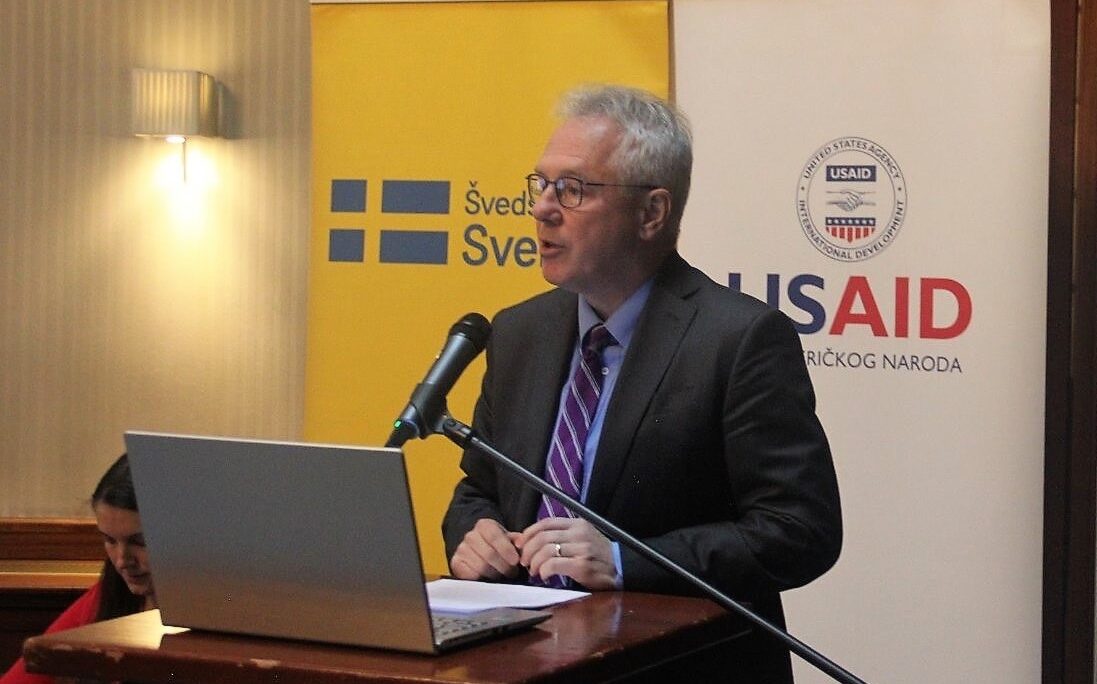 Thank you, Transparency International BiH, for the invitation to speak to you all on International Anti-Corruption Day.  Since my arrival in February of this year, I have talked candidly and frequently about the negative impacts – on almost every aspect of society – of this country’s pervasive corruption.  Corruption impacts the daily lives of the people of Bosnia and Herzegovina in countless ways, and the trend lines regarding corruption are not good.  This is born out in Bosnia and Herzegovina’s low marks in just about every major, reputable, international index that measures corruption.  It is getting worse, not least because many of the people charged with combating it, from political leaders to law enforcement, prosecutorial and judicial officials, have either failed to address it, benefit from it, or actively participate in it.

The October elections provide an example.  The Coalition of Free and Fair Elections, Pod Lupom, as well as reputable civil society organizations, including Transparency International, identified irregularities, discrepancies, and fraud in electoral contests across Bosnia and Herzegovina.  It is still not fully known how widespread the fraud was but judging from the findings of those organizations which monitored the elections, it was serious.  If electoral fraud is left unchecked, it undermines both democratic institutions and the people’s faith in democracy.

The 2020 municipal elections in Doboj were marred by fraud, and this fraud went unpunished.  This may well have encouraged some politicians to believe that they could engage with impunity in the types of behavior identified by Pod Lupom and others in this electoral cycle.  It is not unreasonable to conclude that if the allegations of fraud from 2022 are not thoroughly investigated and the perpetrators of any electoral fraud are not punished, then the problem will be worse in the 2024 and 2026 electoral cycles.  Citizen confidence in democracy will continue to erode, if not collapse altogether.

It is incumbent on the responsible authorities – the country’s police, prosecutors, and judges – to investigate allegations of electoral fraud swiftly and fully and to punish those found guilty to the fullest extent of the law.

There is a growing body of evidence emerging from the SKY and ANOM-derived investigations which suggests that politicians from across the political spectrum, as well as law enforcement and security service personnel, and prosecutors, have been working on behalf of organized criminal groups rather than on behalf citizens.  The Tito Cartel, the Arnautovic Group, the Matkovic Group, and the Kelmendi Drug Cartel – these groups exploit BiH’s weak state structures and the political capture of state and entity institutions to undertake their criminal activities.  Money laundering, extortion and racketeering, and narcotics trafficking – these are not victimless crimes.  Individuals suffer.

And the activities of organized criminal groups and their corrupt protectors or enablers do not just impact individuals.  They have a broader impact on society.

They breed fear and violence, they limit local control and individual autonomy, especially among the most vulnerable members of a community, and they constrain possibilities for legitimate economic activity, which in turn limits prospects for economic growth.  In short, they contribute to a general decline in the quality of life.  All of this is bad for the people Bosnia and Herzegovina no matter where they live in this country.

The nefarious tentacles of these organized criminal groups stretch well beyond Bosnia and Herzegovina, and not just to the wider Western Balkans region, but across the entire Trans-Atlantic community space.  That is why the United States Government is committed to pursuing the Sky and ANOM investigations wherever they made lead.

High-level corruption is often what makes the headlines, and it is a serious problem in Bosnia and Herzegovina, but corruption is not just about drug kingpins and politicians.  It touches the lives of this country’s citizens in countless, less headline grabbing, but no less damaging ways.

Mothers, like Dženana from Zenica, are forced to pay bribes while giving birth, handing over huge amounts of money, for them, to ensure their doctor performs one of his or her most fundamental and sacred responsibilities – bringing a baby into this world.  The practice is so pervasive that some patients will preemptively offer payment for a medical service above and beyond the listed fee to ensure adequate care.  That is not a gift, that is corruption.

Unfortunately, corruption infects the entire health care system in Bosnia and Herzegovina, and it involves much more than medical practitioners seeking bribes for the provision of services.  Here in Sarajevo, Suzana was intentionally misdiagnosed with cancer so she would have to pay for an expensive surgery.  In addition, the illegal procurement of lifesaving medical equipment has direct, and potentially deadly, effects on patients.  Earlier this year, the FBiH Health Insurance and Reinsurance Institute was obliged to finalize the procurement of dialysis machines, after a two-year delay.

The Institute skirted standard competitive tender procedures and paid extremely high prices for the equipment, resulting in multi-million-dollar losses to the FBiH government.  After an outcry from anti-corruption activists, the procurement was canceled and a new, legitimate process was initiated.  The continued delay in acquiring machines led to unnecessary suffering on the part of dialysis patients.

The United States is working to help BiH decontaminate its health sector.  For example, with U.S. government assistance, Sarajevo Canton set up a health task force to improve transparency and information sharing and help reduce corruption in high-risk areas of the sector, including employment, prescription drugs, and financing.  But there is much more work to be done across Bosnia and Herzegovina.

You may find yourself in a situation like Bojan, from Brčko, who was stuck for eight years working on temporary contracts for a public institution because he was not a member of a political party that could get him a full-time job.  Bojan tried to fight back by suing his employer.  His employer responded by not renewing his contract.  Too often, recruitment and hiring procedures, at all levels of government, are not merit-based or transparent.  As a result, the recent graduate from the economic or legal faculty, looking to put his or her degree to work, looking to pursue a fulfilling career, and looking to build a prosperous life for himself or herself in Bosnia and Herzegovina cannot secure a job that allows him or her to do so.  Corruption, specifically the kind of political party patronage system that pervades BiH today, makes it unnecessarily difficult, and in some case, impossible to do so.  As a result, the talent many young people have to offer their country is squandered.

Many young people choose to leave Bosnia and Herzegovina rather live with constrained professional and economic opportunities.

An estimated 55,000 people are leaving Bosnia and Herzegovina every year.  Eight years ago, according to the 2013 census, BiH had a population of approximately 3.5 million.  This was likely an overestimate, but regardless, the best experts today believe BiH’s population is somewhere between 2.5 million and 2.6 million.  That is a dramatic decline in just 8 years.  Corruption is a major factor driving the exodus.  It is depleting BiH of human capital.  Many in Bosnia and Herzegovina’s political class make a lot of noise about how they, and only they, can protect their ethnic compatriots, but the data tells us that they are not protecting anyone.  Instead, their corruption is driving the people they claim to protect from the country.

For those who stay, perhaps to start their own business, they, too, will find their lives impacted by corruption.  Corruption is a serious obstacle for businesses operating in Bosnia and Herzegovina.  The business registration and licensing processes are overly complex and particularly vulnerable to corruption.  Too often, businesses are asked to pay bribes to obtain necessary business licenses and construction permits, or simply to expedite the approval process for either.

Politicians often resist attempts to simplify, streamline, and harmonize business processes in Bosnia and Herzegovina.  Sometimes they claim that this resistance is necessary to protect some ethnic equity or competence, but often the resistance to change is pecuniary.  The current system may be hard on entrepreneurs and private sector employers, but it is lucrative for politicians and senior officials.  If an unaffiliated businessperson perseveres and navigates this maze, and if he or she wishes to do business with the government – at any level – then instead of opportunity, he or she may find politicians and officials steering lucrative public procurement contracts, not to the best bidder, but to the best-connected bidder.  The cost of all this extends well beyond the individual business owner; it negatively impacts the prospects for economic growth and prosperity throughout Bosnia and Herzegovina.

Corruption also impacts individual and community quality of life.  There are, frustratingly, countless examples of illegal construction and environmental exploitation that threaten the health and wellbeing of BiH citizens.

There is the lime factory in Kreševo that just started using illegal fuels, threatening to displace families who have lived nearby for years.  In Livno, Marijana lives in fear every day that her family will be left without drinking water because nearby geological research and drilling was started without required permits.  And in a village near Višegrad, Emin and his neighbors may be forced to move because an illegal landfill, created without any permits, continues to encroach on their community and threaten their health.

There are many other individuals and communities in similar situations throughout Bosnia and Herzegovina, and it is difficult for them to fight back.  Corrupt actors often intimidate and threaten citizens to ensure their silence.  Letters are sent to international donors in an effort to discredit citizen action groups; employers are contacted and asked to fire employees who are civic activists; and frivolous or bogus lawsuits are filed to discourage citizens from fighting for their rights.

These are scenes from a mafia movie, not a country with the rule of law, and the country’s politicians and judicial institutions are doing far too little to change this.  As I have already noted, too often they are part of the problem, not part of the solution.

Where we can, the United States government is standing behind those who are pushing back against corruption.  For example, in East Sarajevo, two young activists named Sara and Suncica questioned the legality of environmental permits issued to a company to construct mini-hydroelectric plants on the Kasindolska River.  In response, the company slapped Sara and Suncica with a lawsuit that seeks to discredit them.  With legal aid provided from a U.S. government-supported civil society organization, these young women are fighting back.  The United States is prepared to help others do the same.  In fact, we learned this week that, after years of fighting irregularities and procedural errors, activists in Mostar achieved victory by having proposed hydroelectric dams at the Buna canals removed from the city’s spatial plan.  Their work, with United States support, protected a national environmental treasure threated by corruption.

The examples I have provided today are unfortunately just a small sampling of the many, many ways that citizens endure corruption.  Citizens deserve better.  They deserve efficient, transparent, accountable, and honest government.  They deserve good governance, which means politicians and institutions focused on producing concrete results that improve the lives of their constituents rather than on lining their own pockets or protecting organized criminals from the consequences of their actions.

We must work together to call out corruption when we see and experience it; we must support citizens who insist that it stop; we must demand that those engaged in it are punished; and we must hold those who pervert public service for personal gain accountable.  The United State has made use of its sanctions authorities to do just that, but we have also supported civil society organizations, community groups, investigative journalist and many others in Bosnia and Herzegovina as they fight against corruption.