Home Početak | News & Events | Hit Broadway Musicale in BiH – the Story of a Group of Nerds on a Quest for Glory! 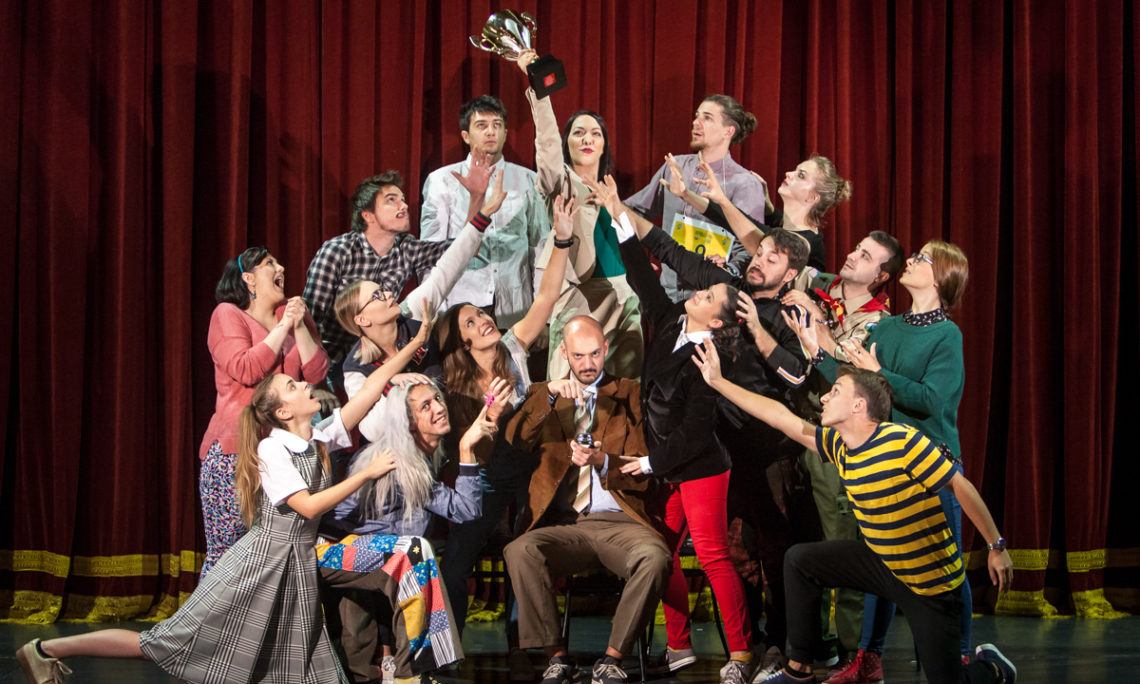 Story of a group of nerds on a quest for glory! Who will take home the trophy?

The U.S. Embassy in Bosnia and Herzegovina proudly announces the launch of BiH Broadway, a project that brings together 16 young actors from cities around BiH to work with a team of American artists to produce the hit Broadway musical, The 25th Annual Putnam County Spelling Bee, the story of a group of nerds on a quest for glory! The show will have its premiere at the National Theater of Sarajevo on September 28, and then tour to six other cities around the country (Mostar, Bijeljina, Tuzla, Zenica, Jajce and Banja Luka).

The project began with auditions in March 2018 at the drama academies in Sarajevo, Tuzla and Banja Luka to select the talented actors and singers who make up the cast.  After a one-week workshop in June at the Academy of Dramatic Arts in Banja Luka, the group reunited in Sarajevo to begin rehearsals. The musical they produce will be an outstanding demonstration of what young people can accomplish when they work together towards a common goal.  The project is also a unique example of cultural exchange, with a group of BiH actors working with American artists and adding their unique Bosnian artistic perspective to a very American art form:  the Broadway musical.

AARON THIELEN is the Artistic Director at the Marriott Theatre in Chicago IL. In his twenty-three years associated with the Marriott Theatre, Thielen has been involved with over 125 productions. He has worn many hats including performer, choreographer, designer, writer, director and now Artistic Director. Aaron is also the co-writer of two award-winning musicals, OCTOBER SKY and HERO. He co-authored the award-winning All Night Strut, A Fascinatin’ Rhythm and Now and Forever: The Music of Andrew Lloyd Webber with Marc Robin. Thielen directing credits include Spring Awakening, She Loves Me and the upcoming 75th anniversary production of Oklahoma!

RYAN T. NELSON (Music Director) is a Lecturer in Music Theatre for the School of Communication at Northwestern University and Music Director for Northwestern’s Virginia Wadsworth Wirtz Center for the Performing Arts. Ryan is also the Resident Music Director at Chicago’s Marriott Theatre, where he has music directed dozens of productions, including the world premieres of October Sky, Hero, Andrew Lloyd Webber: Now And Forever and For The Boys. In 2016, Ryan won the Jeff Award for Music Direction for Man of La Mancha, and his work on A Chorus Line and The Light in the Piazza at the Marriott were both recognized with Jeff Award nominations for excellence in Chicago theatre.  He has been on the faculty of Northwestern University for fifteen years, formerly as an Assistant Professor of Music in Northwestern University’s Bienen School of Music.