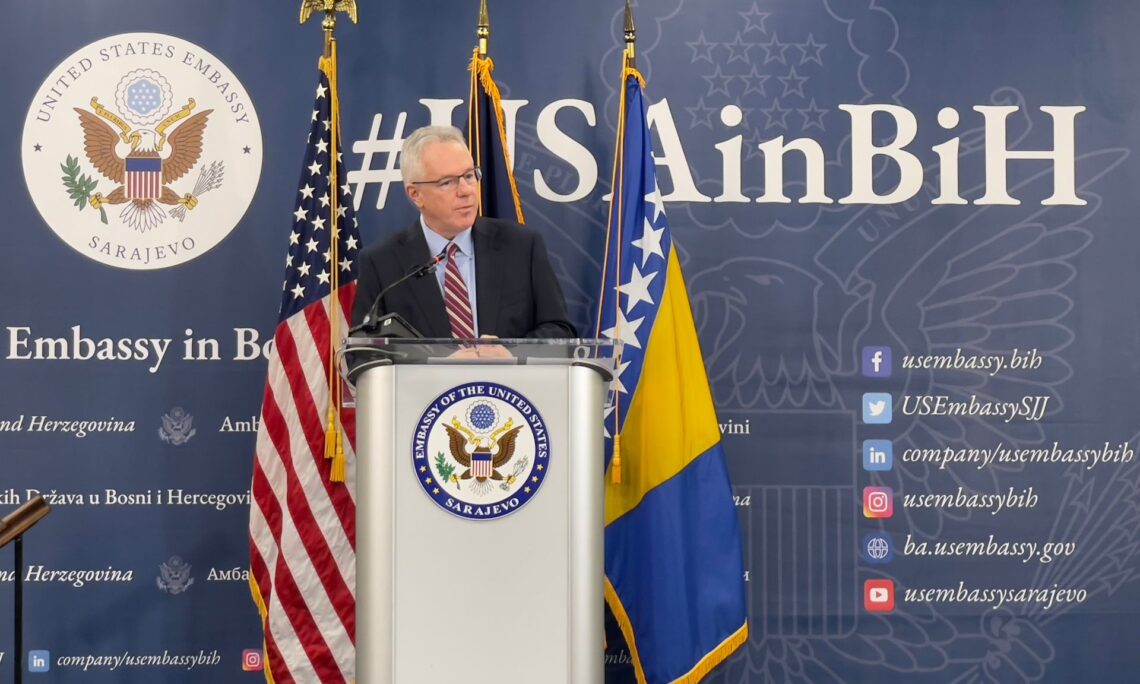 Good afternoon, everyone.  Thank you for joining us today for my first press conference.  I would like to first share a few thoughts with you and then outline my priorities.  Afterwards, I will be happy to take your questions. I am thrilled to be back in Bosnia and Herzegovina.  It is an honor to lead our talented team of American and local staff, who come to work every day in Sarajevo, in Mostar, and in Banja Luka to advance the United States’ interest in an independent, democratic, multi-ethnic, and prosperous BiH.

As you know from my bio, I served here as Political Counselor from 2006-2009.  I recognize that I am returning to BiH during what many consider to be the most difficult period in its modern history.  BiH requires functional, efficient, and accountable state-level institutions in which all leaders participate in good faith.  It also requires functional, efficient, and accountable entities that are focused on building a democratic and prosperous future for their residents.  Right now, BiH has neither.  With this in mind, I will make it a priority to support the implementation of the Dayton Peace Accords, the subsequent state-level reforms that your elected officials supported and agreed to, and most importantly, Bosnia and Herzegovina’s sovereignty and territorial integrity.

I know that BiH is a complicated environment and that my work here will not be easy.  There are many tough problems, but my team and I are ready to roll up our sleeves and work with our local and international partners to help resolve them.  BiH cannot afford to allow the perfect to be the enemy of the good.  So, my team and I will be guided both by enduring Euro-Atlantic values and by a spirit of pragmatism.

Russia’s unprovoked war on Ukraine has changed the world, and it is reshaping European geopolitics, including in the Western Balkans.  The people of BiH know all too well the suffering and losses caused by war.  The aggression in Ukraine and images of suffering are terrible reminders of what this country suffered from 1992-1995.  They are also important reminders that BiH’s place is with the Euro-Atlantic community, not with an authoritarian, backwards looking Russia.  This fact will also guide my work in Bosnia and Herzegovina.

The path to Euro-Atlantic integration is not easy.  It is not free.  It must be earned, and it falls to BiH’s leaders to do the work necessary to secure the future they have pledged to their voters, and the future their constituents want for themselves and their children.  BiH citizens have every right to expect that their leaders focus their time and energy on the job they elected them to do, and as in any democracy, the citizens of this country should hold their leaders accountable for their performance.

Over the next 3 years, I will focus on following.

The United States cannot provide Bosnia and Herzegovina with a democratic and prosperous future, but we can and will work with you and your leaders to help your country attain it.

Thank you for your time, and I will now take your questions.