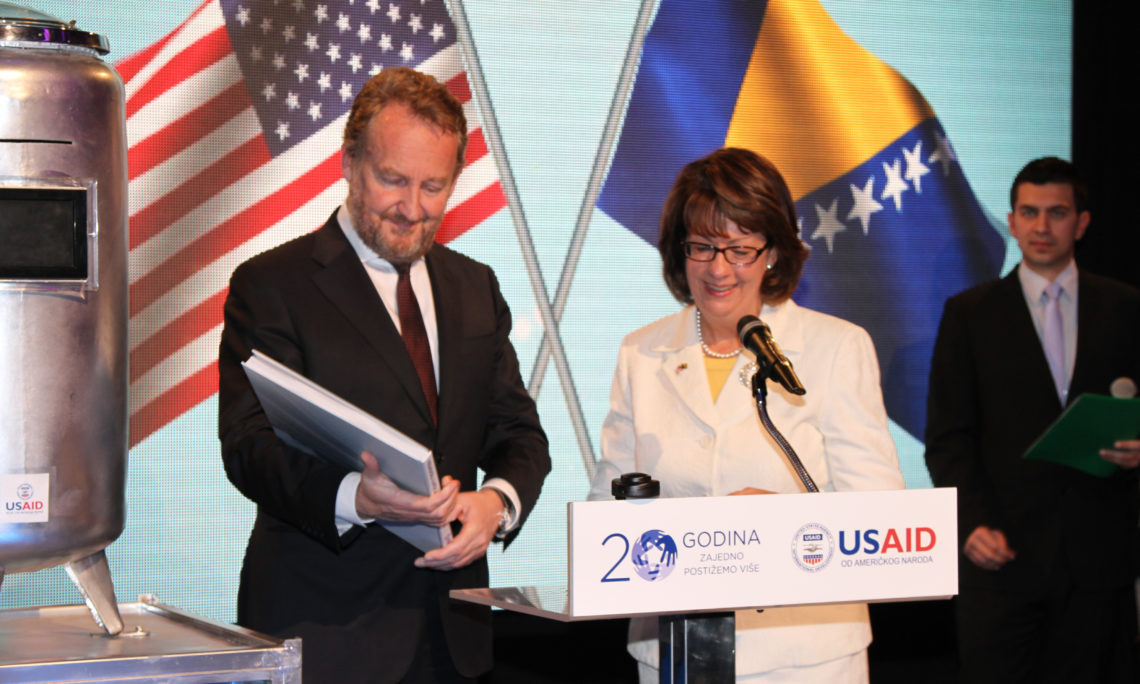 As part of the ceremony, Ambassador Cormack and Presidency Member Izetbegovic sealed a time capsule holding messages of citizens from throughout BiH outlining their hopes, dreams, and aspirations for the next 20 years.

On Saturday, November 21, United States Embassy to Bosnia and Herzegovina, together with the USAID Mission to BiH, hosted an event marking the 20th anniversary of the Dayton Peace Agreement in BiH, and two decades of peace that have followed. U.S. Ambassador to BiH Maureen Cormack, member of the BiH Presidency Bakir Izetbegovic, and Congressman Michael Turner of Ohio all spoke at the event that took place in the National Museum of BiH in Sarajevo. In her remarks, Ambassador Cormack stressed that “twenty years is a generation, and Bosnia and Herzegovina’s first generation of post-war peace has graduated from school, and begun to take on the leadership of this nation.  They are all seeking the same thing — an outlet for their talents, and a brighter, more prosperous future. The future is now and you are creating it every day.  For you, “Zajedno Postizemo Vise” – together we achieve more – is not just a phrase on billboards all around this country – these words are the roadmap to your prosperity.” As part of the ceremony, Ambassador Cormack and Presidency Member Izetbegovic sealed a time capsule holding messages of citizens from throughout BiH outlining their hopes, dreams, and aspirations for the next 20 years. Sealing the time capsule, Ambassador Cormack noted that “by the year 2035, the young people who wrote these messages will be adults, many of them parents with children of their own.  May we all work together over the next twenty years to ensure that when this capsule is reopened, the words within it are no longer hopes and dreams for the future, but an actual representation of the peace and prosperity enjoyed by every citizen of Bosnia and Herzegovina.”