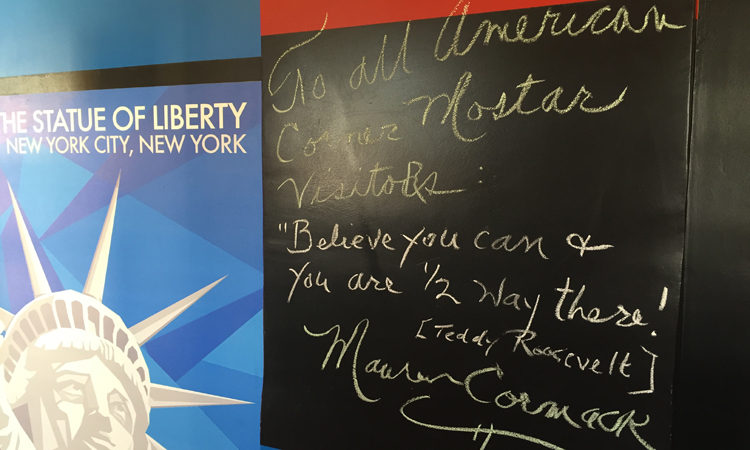 Ambassador Cormack's message to all the visitors of American Corner Mostar

We are very excited to announce the official reopening of the newly-renovated American Corner Mostar.  With an investment of over $200,000 in remodeling, technology, staff, and programs, we, together with the help from our friends from the Smithsonian, transformed the American Corner Mostar into a place where young people from Mostar and whole Hrezegovina region will have access to cutting-edge gear, including a 3-D printer, hardware and software for video and music production as well as graphic design, e-readers, and photographic equipment, plus other learning materials that encourage innovation and creativity like robotics and science kits. Installed wheelchair ramp made it accessible to all citizens.

Speaking at the opening ceremony, Ambassador Maureen Cormack said: “If you looked up as you entered the Corner today, you saw a web of interlocking lines along with a new slogan for American Corner Mostar: “We are all connected.”  This simple truth is too often forgotten, and some of the famous Americans whose images appear in the hallway worked hard to remind us to be accepting and inclusive, and to judge people only by the content of their character.” Member of the BiH Presidency dr. Dragan Čovic also spoke at the official ceremony, and said that youth in BiH should learn about U.S. culture and democratic values. “By learning about the United States, we should bring the American dream to Mostar,” said Covic.