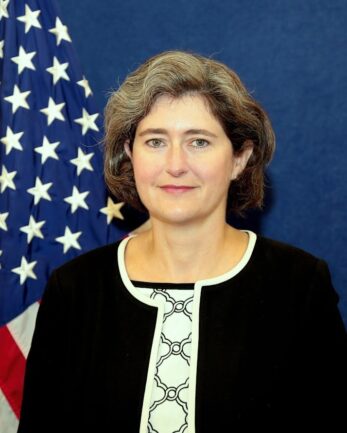 Deborah Mennuti has assumed her duties as Deputy Chief of Mission at the U.S. Embassy in Sarajevo, Bosnia and Herzegovina, on August 20, 2021.

She previously served as the Director of the Office of Russian Affairs in the State Department’s Bureau of European and Eurasian Affairs; the Director of the Office of Analysis for Europe in the Bureau of Intelligence and Research; the Deputy Principal Officer of the U.S. Consulate General in Istanbul, Turkey; the Political Counselor in Belgrade, Serbia; and the Chief of the Political-Economic Section in Almaty and then Astana, Kazakhstan.

Since joining the Department of State in 1993, her other overseas assignments have included Moscow, Russia; Athens, Greece; and Seoul, South Korea.

In Washington, she has served as an Assessor with the Board of Examiners, the Special Assistant to the Assistant Secretary for European and Eurasian Affairs, and the France Desk Officer in the Office of Western European Affairs.

A member of the Senior Foreign Service, she speaks some Turkish, Serbian, Russian, Greek, and French.

She is married to fellow Foreign Service Officer Jonathan Mennuti. They have one daughter.