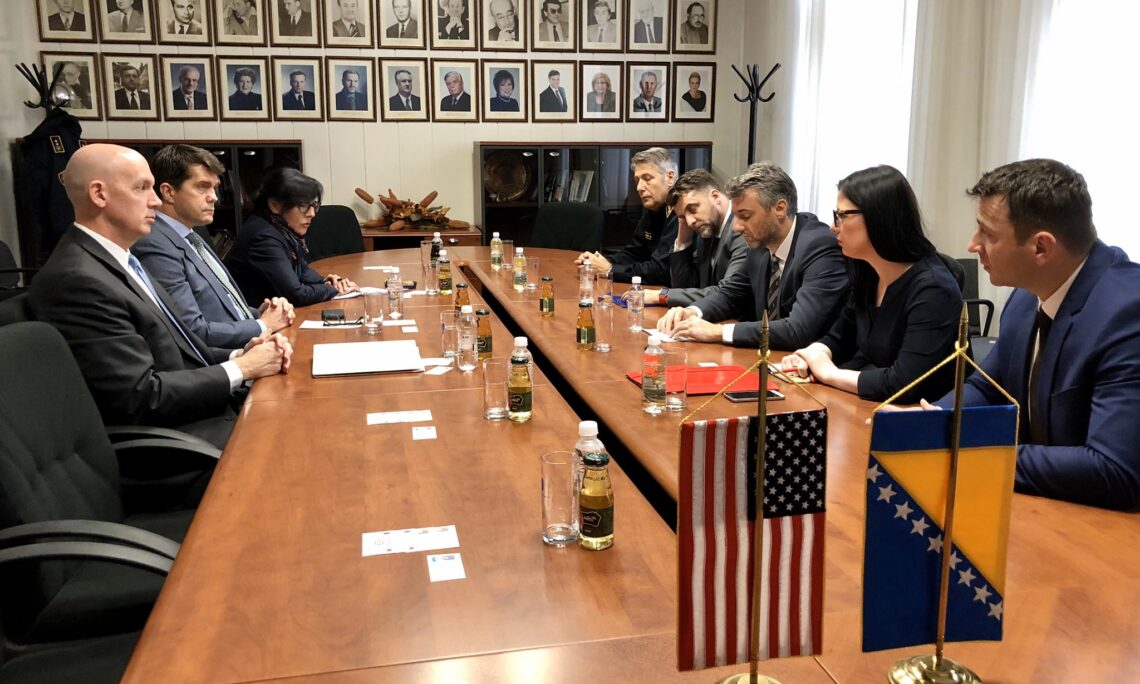 Thank you Prime Minister Forto. The U.S. government and the people of the United States are committed to a secure, prosperous, united and confident future for Bosnia and Herzegovina. Deputy Assistant Secretary of State Jorgan Andrews’ presence here today is one more example of that commitment. For this country to take its place among the community of democracies in Europe, and instill a sense of optimism for the future among citizens, it must deliver results in preventing and combatting corruption.

You know the reality better than I do. A present-day reality that is dominated by corruption is eroding hope for a brighter future. Corruption is not just a concept. When someone’s family member remains ill because the family doesn’t have enough to bribe the doctor, or doesn’t have “the right connections,” that’s a tangible – and terrible – thing. When corruption results in roads and bridges that don’t get built or schools and hospitals that are falling apart, that’s a tangible thing. When western companies don’t invest because bad actors take advantage of the myriad levels of bureaucracy to make a personal gain, that has a real effect.

The citizens of Bosnia and Herzegovina have been voting with their feet – leaving the country to pursue their lives in the European Union, the United States, or elsewhere. You know it, because you probably have friends, or neighbors, or relatives that have left. As I was told recently, they are not “leaving with their families,” but “for their families.” These are people who have lost their optimism for the future of this country.

But here in Canton Sarajevo, a year ago, something out of the ordinary happened. Citizens expressed a sense that things can and must improve, and they did so by rejecting business as usual and the dead end of sectoral politics. They voted for a message of unity over division and a government whose constituency is the public and not particular vested interests. They voted for a future where public money goes: to improving public services like hospitals and schools, buses and trams, and is not diverted to the pockets of the well-connected. They voted for a better future in which corruption does not rule.

Those expectations of citizens place a heavy burden on those elected to govern and those charged with ensuring the rule of law – investigating and prosecuting corruption. It is time to demonstrate that something is changing. That it is no longer business as usual. That corruption cannot occur with impunity. That vested interests that seek to subvert good governance, or officials who violate the public trust, will be investigated, prosecuted and convicted.

You are not undertaking this difficult task alone. You have the support of the United States and others in the international community. For that reason I am very pleased we are here today to announce U.S. government support for Canton Sarajevo’s anti-corruption efforts and for your efforts to restore hope among citizens. And it is for that reason that I am so pleased to introduce Jorgan Andrews, the Deputy Assistant Secretary of State for International Narcotics and Law Enforcement Affairs. Deputy Assistant Secretary Andrews.