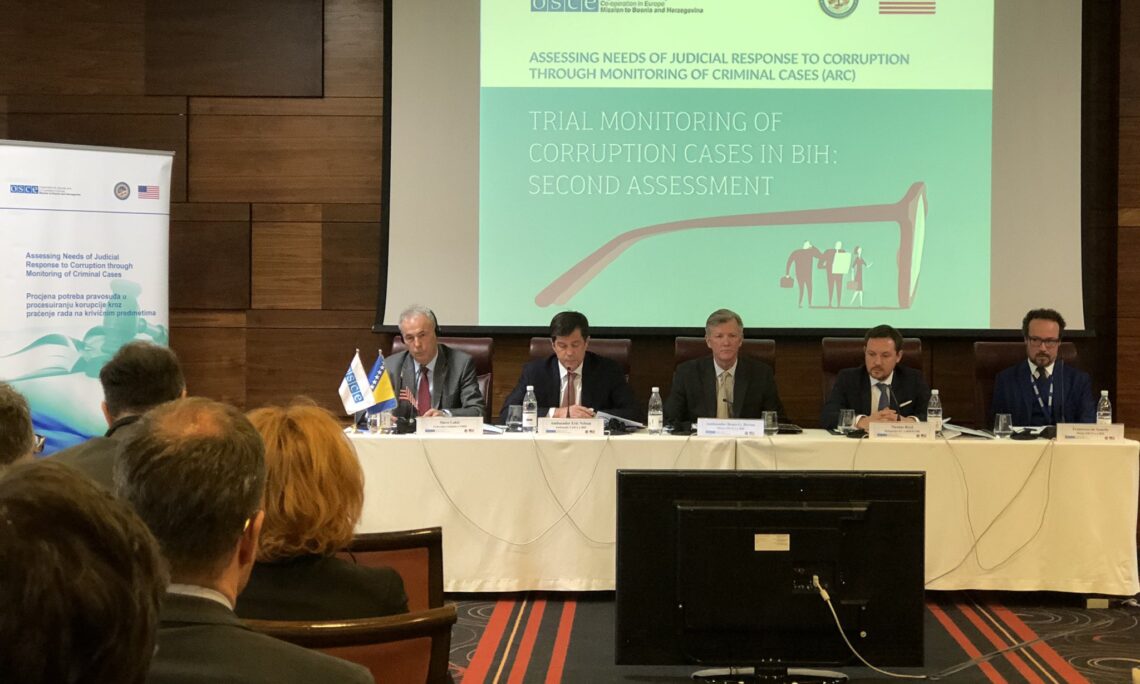 Is there high-level corruption in Bosnia and Herzegovina? If we were to pose this question to citizens of this country, most would say not only is there corruption in BiH, but that this is one of the biggest maladies afflicting the country. They know about corruption in BiH because they directly suffer the consequences. Thanks to corruption, they may not get jobs, or start businesses, and their loved ones are leaving this beautiful country.

Corruption and the rule of law are sworn enemies. Corruption prevails when the rule of law is weak. Corruption is an impediment to political and economic progress. Strong rule of law, which ensures everyone is treated equally, is the backbone of every democratic society. The citizens of this country should look for protection in a fair and transparent judiciary. Instead many look to politicians who engage in fear mongering and divisive rhetoric, distracting them from real issues that affect their everyday lives.

The goal of this report is to help Bosnia and Herzegovina fight endemic corruption, since only through increased transparency can this country hope to solidify the rule of law. Over the past year, the OSCE, with funds provided by the United States, monitored three hundred corruption cases on multiple levels of the court system. Like last year’s report, this report helps bring much needed transparency to the judiciary’s handling of corruption cases.

Like last year’s report, this report identifies major shortcomings in corruption prosecutions and offers useful recommendations on how the judiciary can overcome those shortcomings. Through our capacity building efforts, the United States will continue to assist judges and prosecutors striving to overcome those problems.

However, the report also raises some troubling numbers that indicate that the BiH State Prosecutor’s Office and the RS Prosecutor’s Office are not yet addressing high level corruption. As we stated at last year’s report launch, we note that the reasons for this are not just a lack training or resources, but also political influence.

The numbers also indicate some reason for hope. The report shows that the cantonal prosecutor’s offices in Sarajevo and Tuzla have initiated more high and medium level corruption cases than the BiH State Prosecutor’s Office. We commend those offices for their courageous, principled, and hard work in the fight against corruption.

The BiH State Prosecutor’s Office was created with a mandate to handle the highest level corruption cases in this country. The High Judicial and Prosecutorial Council (HJPC) recently appointed a new chief prosecutor on the state level. Citizens look to the chief prosecutor to prosecute corruption on the highest levels, without regard to political considerations. Without a track record of high level corruption prosecutions, however, Bosnia and Herzegovina will prove itself to be weak in the rule of law and unqualified to join the EU.

This report helps us understand a key reason why the World Bank ranks Bosnia and Herzegovina last in Europe when it comes to ease of doing business. Prosecution of corruption on the highest levels will enable this country to move forward.

In my initial meetings, many government officials and businesspeople have told me they want more American investment. But, U.S. investors hesitate to invest where judges and prosecutors work for politicians, not for justice.

Corruption repels American investors from doing business here because our law, the Foreign Corrupt Practices Act, prohibits the payment of bribes by American companies and citizens. U.S. businesses have a hard time competing where bribes are expected and the rules are rigged. So the people of this country lose. Without U.S. and other honest, high quality investment, BiH fails to progress economically. Bosnia and Herzegovina needs a strong rule of law to increase investor confidence, create more jobs, grow the economy and stem the brain drain of young talent.

Most importantly, Bosnia and Herzegovina needs to make progress on rule of law so that it can become a credible candidate for membership in the European Union. The EU Commission’s Opinion on Bosnia and Herzegovina’s application for EU membership is forthcoming. We expect, like in other prospective EU candidate countries, the opinion will address major rule of law gaps, including a good track record prosecuting corruption, without political considerations. There will be no progress on the EU path if political forces maintain their grip on the judiciary.

There are ways to step up the fight against corruption. First, there are hard-working judges and prosecutors who consistently and significantly contribute to anti-corruption efforts. I urge them to keep fighting the good fight. We are here to support them with training and technical assistance.

Secondly, and more importantly, the HJPC should play a significant role in the fight against corruption. Unfortunately, the HJPC is not doing its part if it allows political forces to distort the selection process of judges and prosecutors. That is, judges and prosecutors should be selected based solely on merit. The selection process should demand that judges and prosecutors be professionally competent, not politically loyal. As a public institution charged with upholding professional standards and the independence of the judiciary, the HJPC must be accountable to the citizens of this country — not the politicians. Today’s report helps assess that accountability. We call on the HJPC to fulfill their mandate and ensure equal justice under the law for everyone.