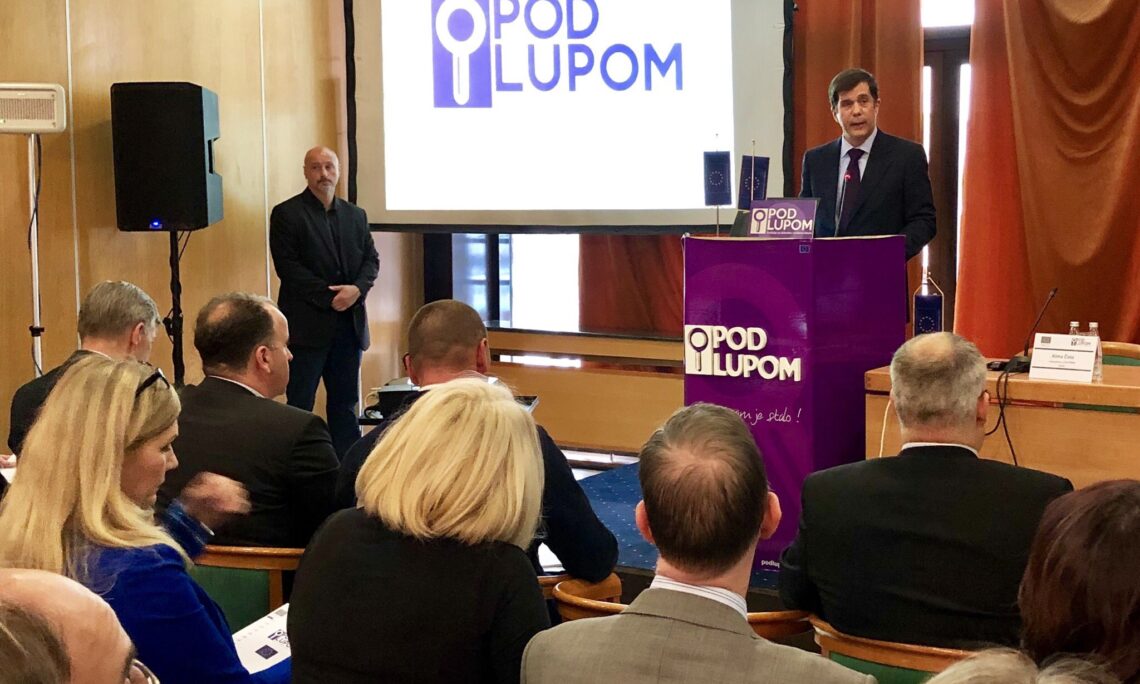 Thank you, Nina, and thank you to all the hardworking members of the Pod Lupom team for your relentless commitment to election transparency.

Dobar dan svima. It is an honor to be here today. The theme of this meeting is critical for any country, but especially for Bosnia and Herzegovina. Here, where you have elections every two years, and the consequences mean so much to the citizens, it is essential that voters feel their voices are heard, and that their votes count.

Although I had not yet taken up my post here, I followed your October general elections closely from Washington.

Our embassy deployed roughly 100 observers, who covered polling stations in over 40 cities and towns throughout the country. They crossed paths with many of Pod Lupom’s own observers in the field. Our embassy observers also witnessed irregularities and fraud with their own eyes.

The large number of reported irregularities underscores the importance of Pod Lupom’s efforts, and shows us that there is much work to be done if citizens of this country are to get the democratic and transparent elections they deserve.

One of the main questions for discussion at today’s conference is whether free and fair elections in Bosnia and Herzegovina represent a “Mission: Impossible.”

I believe that not only is this mission possible, it is vital.

The history buffs among you and, for that matter, anyone who has seen movies like The Untouchables or Gangs of New York will be aware that political machines like Tammany Hall dominated politics in many U.S. cities throughout the late nineteenth and early twentieth centuries.

For decades, criminal organizations masquerading as political parties operated vast patronage networks, using the promise of jobs, bribes, coercion and even violence to maintain and expand their control over government institutions.

The political machines were ultimately brought down by: 1) reforms that depoliticized government institutions by establishing a professional civil service; 2) the institution of primary elections, in which candidates were chosen by the voters, not party leaders; and 3) by the courts, where prominent party leaders, after years of abuse, finally faced corruption, racketeering, and other charges.

The same can happen here in BiH, but only if elected leaders heed the rulings of the European Court of Human Rights and the recommendations of organizations like ODIHR, the Council of Europe, and Pod Lupom.

Pod Lupom has worked extensively with international partners, including our own USAID, and has a blueprint for how to shore up weak points in the current system. The priorities are clear, and in fact, have been for the better part of the past decade.

So why does Bosnia and Herzegovina continue to struggle to meet international standards – and the demands of its own citizens – for a free and fair process each election cycle? After each election, ODIHR and Pod Lupom reports have clearly outlined the areas for reform but no action has been taken.

I am pleased to see the esteemed panel of political party representatives that Pod Lupom has gathered today. You hold the key to breaking the cycle. I’m disappointed that the CEC does not appear to be represented today. They play a critical role. As they are accountable to the elected state parliament, I hope your parliamentary leaders will help them accept and use the feedback from citizens, brought by Pod Lupom, which is so important for the credibility and effective elections every country need to improve.

In my initial meetings with political party leaders, many have spoken of a deficit of trust and mutual respect in politics in BiH as the key impediment to progress toward the West.

I wholeheartedly agree and submit to each of you that there is no better way to show respect for citizens and to build their trust than by enacting reforms that increase the transparency and inclusiveness of elections.

Improving transparency and accountability will help citizens of all faiths, ethnicities, and identities feel respected, protected, and empowered to participate in the political process. It will also make Bosnia and Herzegovina a more attractive destination for U.S. business and investment.

In the end, organizations like Pod Lupom can point the way, but it is up to political leaders to take the lead, and for citizens to hold them accountable.

The need for reforms is becoming more pressing, and the need for courageous, forward-looking leadership is even more critical. Empty promises and rhetoric alone will become ever more futile and continue to spin the exodus of BiH’s best talent.

And, so, I challenge each of the political parties represented here today – and those not present, as well – to set aside divisive rhetoric, to stop finger pointing, and to get down to the difficult but important work of delivering positive change and results to the citizens of this beautiful country.

I will close by thanking the Pod Lupom team once again for your courageous vision and initiative. Your work shows the critical role that civil society plays in building a vital and resilient democracy. Hvala puno.