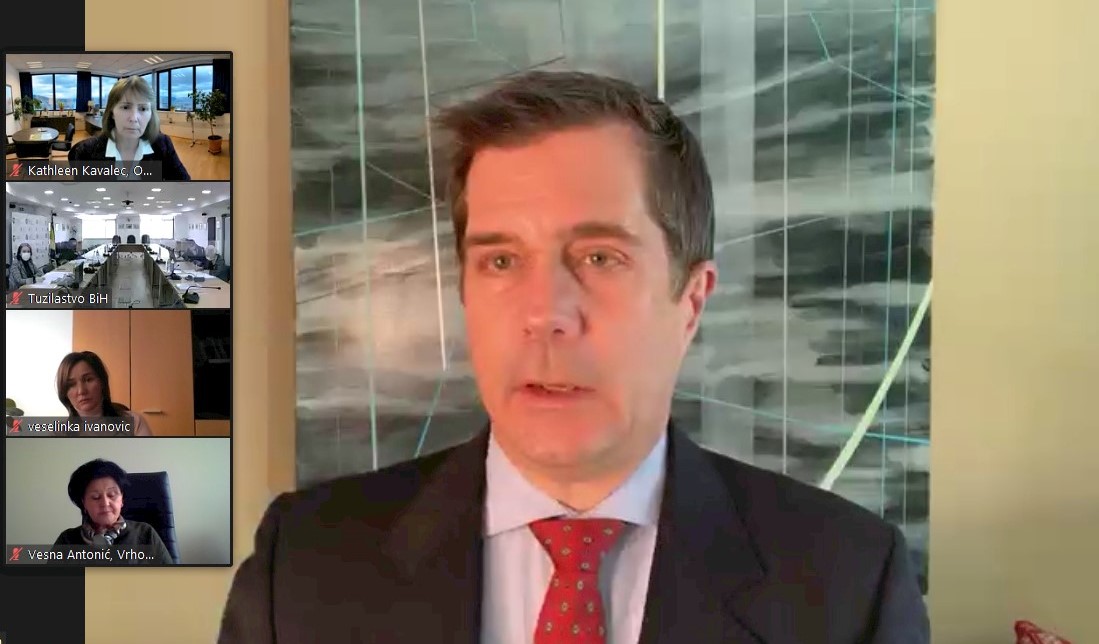 Thank you Ambassador Kavalec, and welcome Ambassador Sattler. Also welcome to the everyone listening and taking part in this important discussion.

An effective judicial system that combats corruption is fundamental to to BiH’s Euro-Atlantic integration. Year after year, various levels of the judicial system are failing. The justice sector and law enforcement are controlled more by political forces than the rule of law. The capacity to investigate and prosecute corruption is not the problem.

This year, the citizens of BiH witnessed corruption in both entities during the pandemic. That showed that corruption can cost lives.

Corruption involves a betrayal of citizens by elected officials. Investigations and prosecutions of corruption should be the top priority of the government, justice sector, and law enforcement.

The international community, including the United States, OSCE, and European Union, is very active in advocating for a transparent and effective judiciary. Unfortunately, the people of BiH are not seeing results.

Today’s report continues to showcase the lack of corruption prosecutions. Year after year there are fewer and fewer indictments and convictions at the same time when corruption is only increasing. This creates a culture of impunity among government officials.

The U.S. invests significant resources in training investigators and prosecutors to more effectively prosecute corruption. We support, and we will continue to support, capable and courageous prosecutors and investigators who have shown some encouraging results. However, the people of BiH should be seeing more results. The lack of results are neither what the people of this country expect nor

The only way to build the citizens’ trust in the judiciary, which is a responsibility for any judicial official, is for Courts to asses appropriate punishments in corruption cases, including sentences that involve prison time.

Prosecutors and investigators need to take more responsibility in acting independently, without deference to political interests. Chief prosecutors need to support line prosecutors, not undermine them. The same goes for investigators. The lack of prosecutions shows many prosecutors’ offices and law enforcement agencies are part of the problem, not the solution.

The report makes it clear there needs to be increased transparency in the judicial process. Outside actors, such as the international community, cannot be the only guarantee of reform. The government needs to take action. Citizens deserve it.

The report echoes the recommendations of the EU’s Experts’ Report on Rule of Law, also known as the Priebe Report, in calling for a speedy reform of the HJPC. Unfortunately, the HJPC still lacks essential tools to have a true impact, such as a system of verification of asset declarations.

Year after year, corruption and the weak rule of law continues to undermine justice, security and prosperity in BiH. BiH continues to fall behind its neighbors for its lack of commitment to addressing these problems. As a result, more and more citizens abandon the country to move to countries where rule of law will protect them and provide them the opportunities they are denied here.

The EU’s opinion makes these deficiencies clear, and the steps required to achieve the EU standards citizens clearly want, beginning without delay with amendments to the HJPC law, a conflict of interest law, procurement law and public administration reform. The politicians and parliamentarians have their worked clearly laid out, and no good excuses for continued delay as the country hemorrhages talent and resources.

Thank you again to the OSCE for this report, and specifically to the investigative journalists and civil society organizations taking part in this conversation, for their continued central role in fighting corruption and promoting reform within BiH.