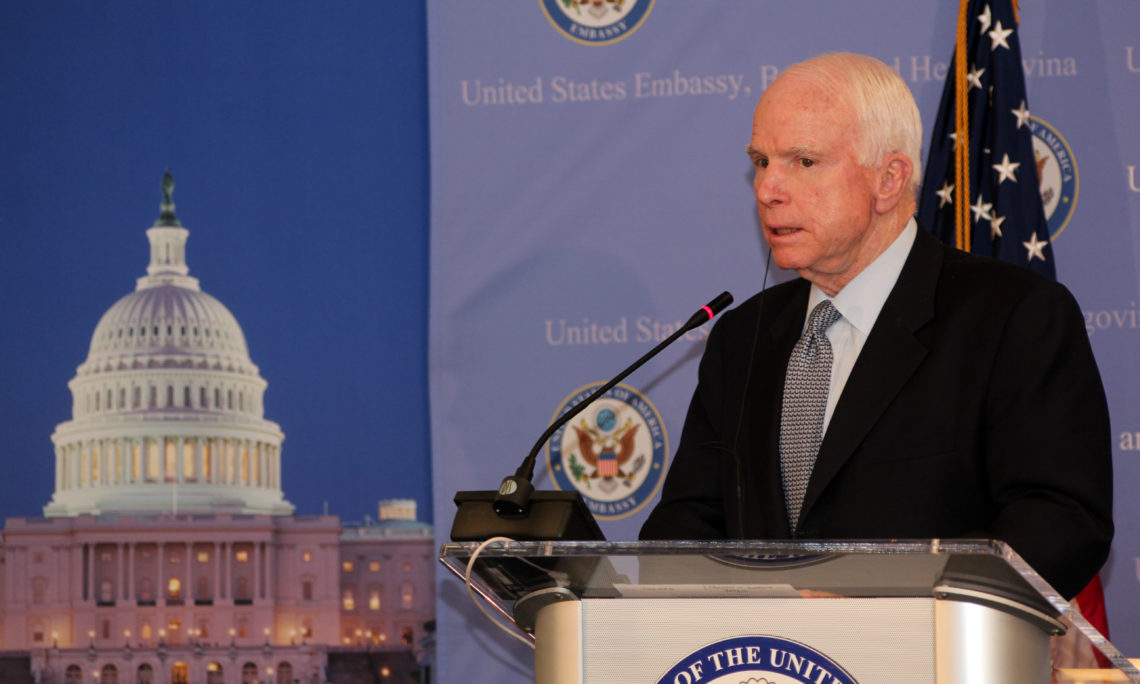 As part of the broader visit to the region, Chairman of the Senate Committee on Armed Services, Senator John McCain (R-AZ) visited Sarajevo on Tuesday, April 11. Following the meeting with BiH officials, Senator McCain released the statement on his visit to Bosnia and Herzegovina.

“I would like to express my appreciation to the people of Bosnia and Herzegovina for their hospitality during my visit.

“On my travels throughout Southeastern Europe, I have been delivering a clear message: the United States’ commitment to a Europe whole, free, and at peace remains ironclad. Stability and prosperity in Bosnia and Herzegovina play an important role in the success of this vision.

“In my meetings with the Presidency and members of the Council of Ministers, I expressed my appreciation for Bosnia and Herzegovina’s contributions to our common security, including in Afghanistan, the counter-ISIS coalition, and counterterrorism cooperation. These contributions, as well as the significant progress made on defense reform, argue for activation of the NATO Membership Action Plan (MAP) for Bosnia and Herzegovina as soon as possible.

“The United States will continue to support Bosnia and Herzegovina, its aspirations to join the EU and NATO, and the reforms necessary to realize its European future. It is clear that there is still a lot of work to be done in this regard, including on reforms to strengthen the rule of law, safeguard an independent judiciary, tackle corruption, and improve financial accountability and transparency.

“But I remain hopeful that a more promising future for Bosnia and Herzegovina is within grasp. Realizing this potential will require political leaders to make tough decisions, forge compromise and consensus, and do the hard work of reform. Those in Bosnia and Herzegovina who have the courage and conviction to bridge the ethnic divide and do what is necessary to promote stability and prosperity for their country will always count the United States and me as friends and partners.”