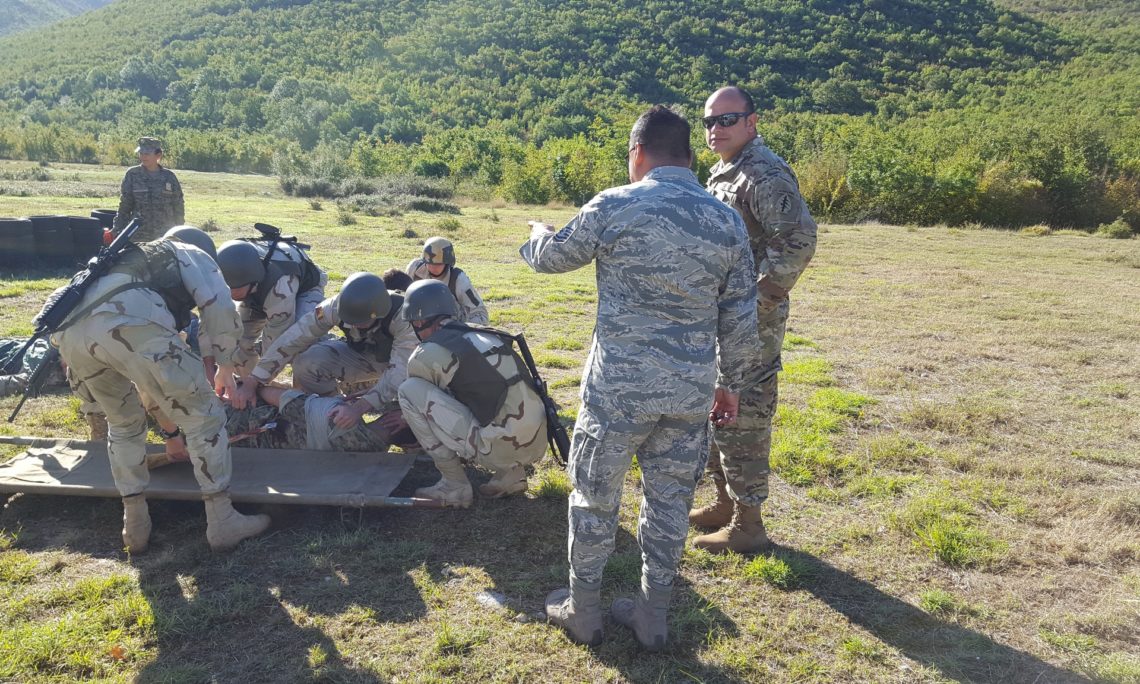 Working as a representative of the U.S. Army at the U.S. Embassy in Sarajevo has been one of the most rewarding and interesting experiences I have had in my seven years of military service.  Currently, I am a member of the Civil Military Support Element (CMSE) at the Embassy, a military unit that works to identify and address civil concerns alongside colleagues from BiH and other U.S. government and non-government groups.  I am also a Special Operations Combat Medic, I was thrilled a few weeks ago to have the opportunity to train a group of 50 soldiers from the Armed Forces of Bosnia and Herzegovina (AFBiH) on NATO-standard tactical medical care procedures and basic life support.

This medical program was planned and organized by the U.S. Embassy Office of Defense Cooperation in conjunction with the Maryland National Guard, who flew five soldiers into BiH for almost a week training alongside a colleague and myself.  The Maryland National Guard is the official state partner of AFBiH and has been working to increase cooperation between the U.S. and BiH for over 14 years.  Working alongside both groups, I quickly witnessed the depth of this relationship!  Just a few days into the training, one of the U.S. instructors was already being treated like a member of the AFBiH, learning to crack walnuts open with one hand like a true Bosnian while on break between events.

With the beautiful mountains of Herzegovina as our backdrop during training, we practiced reacting to various trauma scenarios such as massive bleeding, head injuries, airway trauma, and burns.  From day one, the soldiers, who came from all corners of BiH, were eager to learn, sharing personal medical experiences and asking endless questions to their instructors.  On the third day, we began placing them into more challenging situations where they had to use the tools around them and the skills they had developed to solve each scenario.  For example, how were they going to move patients who were trapped in the confined spaces of a building?  Creatively, they decided to cut a table that was fixed to the floor and had trapped the patient, and used it to carry him.  I was impressed with their ingenuity and the great degree of their cooperation.  Every soldier worked together seamlessly in order to accomplish their assigned tasks.

For me as an instructor, the culminating exercise on the final day of any training event is the most exciting moment.  With our trainees from AFBiH, I had high confidence that the teams and their commanders were going to be able to handle the scenario:  a major trauma exercise.  Already during their training, they had learned to overcome communication failures, planning mistakes, and the problem of limited resources.  I knew they were ready.  We organized an all-out attack of the base, complete with a truck bomb, invaders breaching the wall, incoming fire, and multiple diversions.  The command team knew their squads’ strengths and played to them, diverting each potential catastrophe.

Two and a half weeks later, I returned to the training site with the Assistant Army Attaché from the U.S. Embassy in order to observe the commanders’ evaluation of the training.  I also traveled back later to view the grand finale, or culmination exercise, and witness the progression of the group in a few short weeks.  This time they were under more stress because the stakes were the highest they had been.  Distinguished officers viewed the exercise and evaluated the performance from the sidelines, and the group knew that every action and decision would be judged.  As the scenario unfolded over the course of three hours, we marveled at the how quickly the soldiers had progressed in just a few short weeks of training.  Officers gave orders, non-commissioned officers directed their soldiers, squads performed their duties remarkably well, and each soldier was disciplined and well-trained.  Ultimately, they were able to successfully defend their base against a multitude of threats and medically treat all those “injured” in the process.  The success of their training was apparent as was their dedication and professionalism.  I would be proud to serve beside these soldiers on any mission.