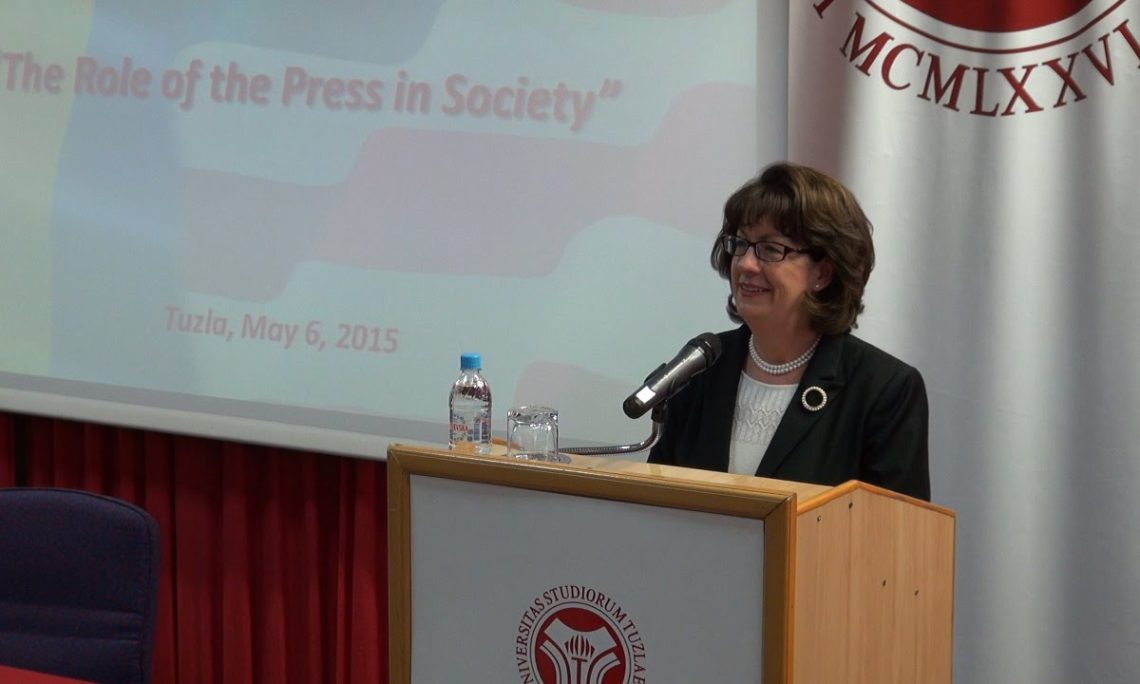 Dobro jutro, dame  i gospodo i hvala vam sto ste  danas moji domacini na Univerzitetu u Tuzli. (Good morning ladies and gentlemen, and thank you so much for hosting me here today at the University of Tuzla.)

Rector Halilovic, esteemed members of the University of Tuzla faculty and staff,  special guests, and dragi studenti, I’m very happy to be here today to talk about an issue that is near and dear to my heart – the role of the media, and specifically your role as future journalists.  This is my second chance to get out and talk to university students, and what I learned from my first stop at the University of Sarajevo is that I really want to leave time for discussion so I can hear your thoughts, so I promise not to talk for too long!

Let me start by asking how many of you read the blog post I wrote last weekend about press freedom in Bosnia and Herzegovina?  If you did, you’ll know that I believe that it’s pretty tough to be a journalist in BiH — but I’m here today to talk about why I’m very glad you’re pursuing this career anyway.

First and foremost – because a democracy depends on an informed electorate.

During last fall’s elections, my Embassy colleagues spent a lot of time encouraging voters to cast their ballot not based on fear or ethnic nationalism, but to choose candidates based on facts and focus on the issues.  Journalists have the difficult task of finding those facts and outlining the issues – not to come to conclusions, but to start the debate, a debate that is one of the most essential foundations of democracy.  A key component of that, and perhaps the hardest part, is figuring out how to make complex issues relevant to viewers, listeners, and readers.

Press in the U.S. don’t always do this well enough, but it is what distinguishes the great ones from all the rest.  In August 2002, I became the Press Officer at the American embassy in Seoul, Korea.  I walked into a perfect storm – the first on-line media organization in South Korea, “Oh My News,” launched the week I arrived, the U.S. military there had run over two middle school girls with a military vehicle and protests were just beginning, and six weeks later the Assistant Secretary for East Asia came to Seoul directly from Pyongyang to announce that North Korea had a highly enriched uranium program designed to build nuclear weapons.  People panicked, and by December, we had 100,000 protestors outside of Seoul City Hall, Americans were being attacked in the streets, and the entire western press corps across Asia – 75 major international journalists — had all moved to Seoul for the December 19 election of a new President.

My phone rang one day and a voice said “this is Thomas Friedman of the New York Times, and I’m coming to Seoul.  I’ll be joined there by David Sanger.”  Well, I don’t know if you know these names, but Tom Friedman is the most senior editorial writer for The New York Times and a Middle-East expert, and David Sanger is their long-time Washington correspondent who is both a nuclear proliferation and an Asia expert. What they had done was to spend significant time, one in the Middle East and one in Asia, building the connections between North Korea’s nuclear program and growing programs of weapons of mass destruction in Syria and Iran.  When they came in to meet the American Ambassador to Korea, they didn’t ask “what do you think about this?”  Rather, they had a list of over 20 propositions that they ran through one by one:  “We are going to write this paragraph … if we print it will we be wrong?”  “We know the following four facts with absolute certainty.  If we then extrapolate this fifth point, will we be correct?”  They had information that went far beyond anything anyone had yet considered, and when their article ran on the front page of the New York Times, it caused an international sensation.  Their hard work and tough research launched a story that continues until today. Here in Bosnia and Herzegovina, fortunately, one problem we don’t have is nuclear issues.  But this society faces major challenges, and has too few brave, tough journalists who are empowered and able to do the hard, long work to get a story that is fully researched and thoroughly sourced.  When I spoke a few weeks ago at the University of Sarajevo, I listed what I think are the key issues in Bosnia and Herzegovina, but let me put them out here as well.  I believe that the five biggest issues facing people here today are the need for Political Reform, Economic Reform, Countering Corruption, improving Education, and creating a shared vision for the future of the country.

When we get to the question and answer sessions, one of the things I’d like to hear from you is how you work to make the link between abstract policy discussions about these issues, and real, tangible impacts on people’s lives.  How can you, as journalists, be leaders of discussions around these issues in such a way as to help your readers move from a sense of helplessness and apathy, to get them feeling empowered to change society for the better and hold political leaders accountable for the promises they make during elections?

Bosnia-Herzegovina has been given a new window of opportunity for success this year.  The EU initiative and a new BiH government open a path to the future that I hope people will grab ahold of – and most journalists have indeed been positive forces on this issue.  Given the lack of political will in this country, however, I fear that for the reforms essential to the success of the EU Initiative – which were spelled out last year in the Compact for Growth – to have a chance, you as the next generation of journalists are going to have to work hard in the coming years. It is critical that both the government and the media explain to people how such technical tasks as public administration reform, modernization of labor laws, and reduction of political interference in public companies will fundamentally improve their quality of life in the long run.

Another time-consuming and sometimes dangerous job of the working press is to expose corruption.  This is an overwhelming problem here in BiH, and one that is crushing the potential for progress.  When people tell me that I need to bring more American investment to Bosnia-Herzegovina, I tell them that will be easy – as soon as the rule of law here gives business the confidence that their investment will be safe from the pressures of corruption – but not before.  I know good investigative reporting takes time, it can be expensive, and again – it requires courage to take on powerful voices.  And that’s what should happen in a democracy with a truly free press.

Before the war in Ukraine caused a rift in U.S.-Russia relations, the Obama Administration had launched something called the U.S.-Russia Bilateral Presidential Commission.  This Commission included over 20 working groups, one of which focused on the media, with a special emphasis on the changing business of media in each country.  I attended two of the four sessions of the Media working group, in Boston and Washington, and led the fourth and last session in St. Petersburg.  Listening to a dozen U.S. and Russian media executives, including Russian oligarchs who owned major traditional and digital media organizations, talk quite openly about the challenges of investigative journalism in keeping societies open and honest is not something I will soon forget.  We set up exchanges of young journalists between major media organizations in Moscow and across the United States, which proved eye-opening for both sides.  I hope one day we will be able to re-invigorate those important exchanges.

Corruption exists everywhere – even in the U.S.  Right now we have not one but two members of Congress who are under public investigation by the FBI. Journalists, often working with partners in civil society like NGOs and watchdog groups, get wind of a scandal, hunt down strong documentation and reliable sources, then publish the results of their investigation.  Law enforcement are often tipped off by such reporting, and take it from there to seek prosecution if warranted.  The perpetrators have their day in court, and go to jail if found guilty.

I’m not naïve – I know there are lots of reasons why that isn’t happening often enough here, but it has to become the norm.  Such honest exposure of this issue is essential for the people of BiH to get where they want to be – to become citizens of a functioning, prosperous state enjoying the standard of living most of Europe does.  Bosnia and Herzegovina is a country rich in so many things – an educated population, beautiful nature, large stores of natural resources and energy. Citizens – each and every one –deserve to benefit from these assets, which they can and will if corruption ceases being a blockade in their path.

Which brings me to what I consider perhaps the most critical role journalists play in society.  We count on media in a democratic society not to just report the facts and to expose political impropriety and corruption, but to expose injustice.  To be the voice of the voiceless – those too often marginalized and overlooked, be it people with disabilities, the LGBT community, victims of domestic violence, or anyone else facing neglect or prejudice.  They count on you to tell their story.

The only way for any society to deal with these issues is to start by shining a light on them – bringing them out in the open where they will be subject to public debate about how to address them and move forward for the common good.  You are that light.

We will continue to join with like-minded partners in the international community like the OSCE’s Representative on Freedom of the Media to defend your right to tell the stories that desperately need to be told in this country.  To hold political leaders accountable, to expose corruption and social injustice. But also to highlight progress when Bosnia and Herzegovina moves forward, to capture the stories of people who are succeeding against the odds and making a difference.  People everywhere I go in BiH tell me they are demoralized by all the negative news – and yet I meet inspiring people every week who are making a difference.  I would love to hear your thoughts on how to get good news stories out to people here as well.

In closing, I want to take a moment to underscore the responsibilities that come with the right to tell these stories.  Journalists have tremendous power to effect change, but nothing will undermine that power faster than irresponsible reporting that discredits the press and causes people to question why media rights should be protected.  Journalistic ethics in the digital age would be another whole speech, and I hope you still retain your ideals and don’t need me to tell you the importance of honesty and integrity in reporting.  But as you get out into the real world and face real challenges, please hold onto those ideals and let them steer your decisions.

Be it quoting reliable sources, protecting the privacy of crime victims, or double and triple checking the facts, as long as you do your part, we will continue to do ours, making it clear to the authorities in this country that press freedom is a priority worldwide for the U.S. Government, and essential to a successful future for Bosnia and Herzegovina.

Thank you and I look forward to your questions and thoughts.